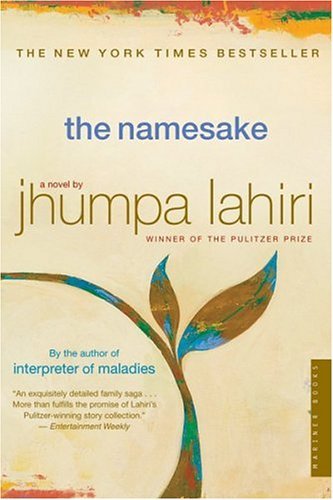 This is a very well-written book in which nothing happens. Now, I have no gripe against a quiet book in which the point is merely to appreciate its evocative and well-crafted language (see To Siberia and Bone China). However, I do become frustrated when the plot disingenuously appears—and continues to appear right up to the very last paragraph—to be on the verge of a major happening of some sort. This always-on-the-edge feeling was my reason for giving Digging to America just two stars, and The Namesake suffers from precisely the same problem (though it earns three stars for being more complex and literary-minded than Digging).

I’m not sure what else to say. It’s the story of a man’s life from his time in utero through his childhood and college years and adulthood, through girlfriends and marriage and divorce, and all the while he struggles with ambivalence about his name, Gogol Ganguli. The story of how he acquired this name is quite good…really all the stories are quite good, and yet as I progressed through the book I kept waiting for something. Waiting, excited by the good writing, waiting…and then realizing that that’s it.  The Namesake is a well-written book that should be read by those with an interest in the immigrant experience of Indians, but not by those who expect that a certain amount of buildup will lead somewhere.

EXCERPT:
The final stop on the field trip, a short distance by bus from the poet’s house, is a graveyard where the writer lies buried. They take a few minutes wandering from stone to stone, among thick and thin tablets, some leaning back as if pressed by a wind. The stones are square and arched, black and gray, more often plain than shiny, caked with lichen and moss. On many of the stones the inscriptions have faded. They find the stone that bears the poet’s name. “Line up,” the teachers say, “it’s time for a project.” The students are each given several sheets of newsprint and thick colored crayons whose labels have been peeled. Gogol can’t help but feel a chill. He’s never set foot in a graveyard before, only glimpsed them in passing, riding in cars. To Gogol’s surprise they are told not to draw the gravestones, but to rub their surfaces. The children begin to scamper between the rows of the dead, over leathery leaves, looking for their own names, a handful triumphant when they are able to claim a grave they are related to. “Smith!” they holler. “Collins!” “Wood!” Gogol is old enough to know that there is no Ganguli here. He is old enough to know that he himself will be burned, not buried, that his body will occupy no plot of earth, that no stone in this country will bear his name beyond life. In Calcutta, from taxis and once from the roof of his grandparents’ house, he has seen the dead bodies of strangers carried on people’s shoulders through streets, decked with flowers, wrapped in sheets.