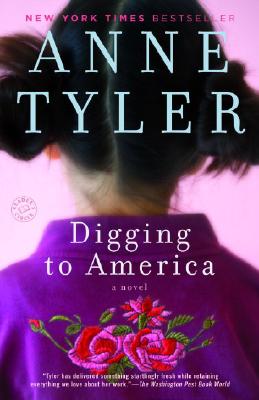 Two families arrive at the Baltimore airport, each to meet their newly adopted infants from Korea. One boisterous family has come with friends, balloons, video cameras, microphones and tape recorders, gifts, and nametags. The other family quietly hangs on the outskirts. They are Iranian Americans, and are almost completely overlooked until everyone has finished the paperwork and is heading down the escalators with their babies. Only then does the loud American mother realize that another Korean baby has been adopted, and she invites the Iranians to her house for an arrival party. The rest of the book is the next five years in the lives of these two intertwined families as their friendships with each other evolve.

Something about Tyler’s writing gave me a paradoxical reaction to this book. On the one hand, I was unable to put it down from the moment I picked it up: I read it while walking the dogs, while out to dinner, and even sitting in a movie theater until the last second when the lights were dimmed. And yet, nothing happens. For five years the families talk on the phone, have lots of parties, and babysit each other’s kids. Nothing happens. Often, for me, a book in which nothing happens is redeemed by beautifully crafted sentences and/or a strong sense of time and place. However, there’s no special time or place here—the setting could be anywhere within any of the fifty states, at any time in the last thirty years. Nor are the sentences particularly remarkable in any way.  So why would I be possessed by an inability to put the book down?  I think there are two noteworthy things about Tyler’s writing: First, her characters are very, very real—as if there were video cameras in these people’s houses and we were watching it all on some reality show. Secondly, she inexplicably manages to create suspense. For 280 pages, I was convinced that something big was going to happen at any moment. Oh, they’re planning a special dinner party and all the extended members of both families will be attending…there’s going to be a dramatic incident of some sort! Nope. I’m sorry to give away the fact that the suspense leads nowhere. But it’s a perfectly fine book for people who like to read very realistic fiction about family life in America.

EXCERPT:
Jin-Ho’s mother phoned in October to invite them all to supper. This was while Maryam was babysitting, and so she was the one who answered. “You come too,” Bitsy told her. “It’s going to be just us, our two families, because I believe the girls should get to know each other, don’t you? So as to maintain their cultural heritage. I meant to ask you before this but what with one thing and another… An early, early supper, I thought, on Sunday afternoon. We’ll rake leaves beforehand.”
Maryam said, “Rake…?”
She wondered if this was some idiomatic expression having to do with socializing. Break the ice, mend fences, chew the fat, rake leaves… But Bitsy was saying, “We still have elms, believe it or not, and they’re always the first trees to shed. We thought we’d throw a big jolly leaf-raking party and let the girls roll around in the piles.”
“Oh. All right. You’re very kind,” Maryam said.