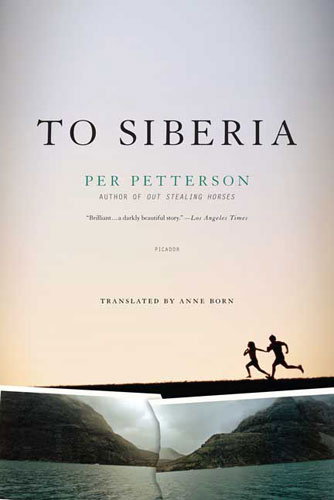 The unnamed narrator in this book dreams of moving to Siberia when she grows up. She has read all about it, has studied photographs of it, and at the age of nine knows—and practices pronouncing—the names of all the cities she will pass through on the TransSiberian railway.  In her obsession with the cold and how best to survive it she reminds me very much of the little-girl narrator of Shadow Baby, who also fantasizes endlessly about survival in a harsh, snowy environment.  Strangely, however, the girl in Petterson’s novel is already living in a viciously cold landscape—she and her older brother (who more sensibly is fixated on moving to Morocco when he grows up) live in northernmost rural Denmark on the eve of World War II.  Their village is tiny, their parents have no money, and danger from drowning, freezing, or falling through the ice is ever-present. But even while describing her cold and difficult life, her thoughts always return to Siberia and its obviously superior qualities:

Here everything is brickwork and cement. The water seeps in through
the cracks and spreads in damp flowers through the wallpaper so it
peels off and the kitchen floor is icy to the feet even in summer with the
sun shining in. There is no glow in bricks. In Siberia the houses are
built of timber that gives off the good smell of tar and warmth in summer,
and when the long winter sets in the glow stays in the logs and never
fades.  …They have different clothes in Siberia that I can learn to wear
instead of now when I have only my thin coat against the wind that
comes in from the sea between Denmark and Sweden and blows straight
through everything. They have caps made of wolfskin and big jackets and
fur-lined boots, and lots of the people who live there look like Eskimos. I
might pass as one of them if I cut my hair short. And besides I shall sit in
the train and look out of the window and talk to people, and they will tell
me what their lives are like and what their thoughts are and ask me why I
have come all the long way from Denmark. Then I will answer them:  “I
have read about you in a book.” And then we’ll drink hot tea from the
samovar and be quiet together just looking.

Clearly, Petterson has nailed the voice of an authentic, likeable, intelligent, and funny little girl. Later (about halfway through the book), when we jump to World War II and our narrator is now fourteen, the author successfully navigates this change; his dialogue and descriptions of the girl and her friend, as they sit on the pier watching German soldiers swim, are true to life and entertaining: “‘But he is good-looking. He’s bound to have a young wife in Germany. She sits at home listening to Sara Leander on the radio and knitting warm socks with a blond baby inside her. And now he’s going up to those ferocious Norwegians, and maybe the socks won’t get there in time. Poor thing.’” The second and final jump occurs in the last third of the book, when she is twenty-two. Again, she is just as she should be: significantly more complex, peculiar—even aggravating—in a way that makes sense if you knew her as a young girl, and with her unique humor intact but more subtle.

Perfectly capturing the multi-faceted emotions of a girl at three different ages would be problematic for many male writers, but Petterson succeeds, which is a testament to his writing talent and clear understanding of female relationships. You would think that a male writer talented enough to depict this girl so convincingly would succeed with the male point of view as well. All the more strange, then, that to me it’s the boy (the narrator’s brother) who doesn’t really ring true. Throughout the book I had trouble seeing him as a real person. He strikes me as merely a caricature of a young, idealistic, charismatic hero obviously doomed in some way.

The mother was also a problematic character, though I liked her very much. At issue here is the believability of the relationship between her and her two children.  Both parents are odd and extremely aloof, but the children nonetheless struggle mightily to forge some sort of relationship with their dad (understandable) while seemingly not caring about their mother one whit (hard to believe).  She is a religious zealot and sings annoying hymns at the piano that go on for much too long, but those annoying traits are not sufficient to explain the children’s complete disdain (actually, near hatred) for her.

These problems did not, in the end, hinder my enjoyment of the book. Petterson’s descriptions of the setting are so vivid I really feel as though I just visited Denmark in the 1930s and ’40s. And his way with words is so poetic I often found myself rereading sentences.

EXCERPT:
Lucifer just kept on trotting through the town along Danmarksgate, across the church square, past the Loveapotek and past our road where I stood on the corner in my coat, waiting and stamping my feet to keep warm. I had been waiting a good while and finally he came, sitting big and stiff in the trap behind the horse on his way to the Aftenstjernen to get drunk. That was the first place he stopped at, with a thick rubber band round his wallet. I had seen that wallet. The rubber band was red, and when he had taken some money out and was folding the wallet up again, he held the rubber band between thumb and fingers and slapped it back with a snap that was meant to be heard.

Lucifer’s hooves clattered on the cobblestones, but there was no need to hide, Grandfather never looked to the side, and I was freezing and pushed my hands up the sleeves of my coat like a muff, and if he had seen me he would not have recognized me, because he didn’t really see anything.