Twenty Chickens for a Saddle 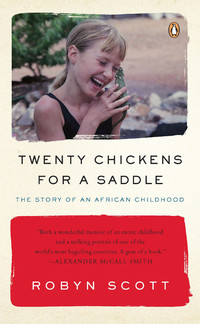 Twenty Chickens for a Saddle: The Story of an African Childhood, by Robyn Scott.  Penguin (2008), 452 pages

I definitely recommend this book for anyone who is fond of memoirs about growing up in an exotic locale with an eccentric family. The author writes about her childhood in Botswana in the ’80s, successfully employing the child’s voice while also providing the reader with the necessary background about Botswana’s politics, geography, and wildlife.

Inevitably, comparisons will be made between this book and Don’t Let’s Go to the Dogs Tonight. That author, Alexandra Fuller, is twelve years older than Robyn Scott and writes about Zimbabwe; Scott was born in 1981 and writes primarily about Botswana, just to the south of Zimbabwe, though in the last quarter of the book she attends boarding school in Zimbabwe. If pressed—by someone who inexplicably insists that they can only read one memoir about a girl growing up in Africa—I would say that Dogs is the superior book. However, Twenty Chickens is absolutely worth reading, particularly for anybody with any interest in homeschooling.

Fuller’s childhood had more harrowing drama. Zimbabwe at that time was going through dire political changes that necessitated (or so the parents believed) that the children learn to use rifles at a young age. The family also suffered the deaths of not one, not two, but three children, which essentially turned the mother into a distant alcoholic who had trouble relating to her remaining children. By contrast, Scott’s family endured no real trauma; Botswana was essentially the most stable country in Africa in the 1980s; and both of her parents were loving, involved, and totally dedicated to providing the best (albeit incredibly untraditional) education that they could.

This book is practically a primer on the benefits of homeschooling, though with a twist—Robyn and her siblings basically ran wild through the Botswanian wilderness every day, their mother only providing sporadic lessons that followed the children’s interests and never entailed sitting down at a desk to answer questions.

As Robyn Scott writes, her “Mum’s” philosophy was “mostly a do-nothing experiment.”  Weeks would go by in which the only schooling was listening to her mother read aloud from her vast library of history, homeopathy, literature, and environmental topics.

When the author entered formal school for the first time at the age of fourteen, she was behind in some subjects, significantly ahead in others—but what she gained through fourteen years of total independence in the wilderness (riding her barely tamed horse through crocodile-invested rivers, learning the Latin names of every tree and snake within a five-mile radius)—is immeasurable. And nobody can argue that her first fourteen years harmed her, as she later (after the period written about in the book) earned a Masters at Cambridge via a scholarship.

Unfortunately, the last quarter of the book falls apart somewhat, which is the only factor that prevents me from declaring this to be a “must-read, run-out-and-buy-it-now” book. I think the problem was in deciding where to end her story. After 340 pages of thoroughly covering her childhood from the age of six until fourteen, suddenly with just a hundred pages left the author tries to cover her four years of boarding school, but does so through an unconnected series of highlights of events, rather than the detailed descriptions that characterized the rest of the book. During these years the author only visited the family farm for one or two holidays a year, so the center of the story—the farm and her siblings—is completely lost, which results in scattered, vignette-like writing that is a complete departure from the rest of the book. And with just twenty pages left to go, the author skips to 2002, then to 2004. I was disappointed that Scott didn’t give the book a definitive, strong ending (probably should have been shortly after leaving for school in Zimbabwe) and leave all the updates for the Epilogue.

Worst of all, the author suddenly begins reproducing letters to and from home in the last hundred pages of the book. I really hate letters in books, and particularly hated it in this book because it was such a departure from the previous wonderful writing style. Definitely a mistake to suddenly start printing letters after 350 pages of not doing so, and, in my opinion, a cheap, too-easy way to attempt to fill in the boarding-school years.

But I recommend the book anyway, for anyone who’s interested in homeschooling and/or young girls growing up in Africa.

EXCERPT:
Outside Grandpa’s front door, we paused, holding Keller and Smiley by their scruffs to stop them scratching at the gray mesh spring door. A volley of extraordinarily loud and irregular snores confirmed we were in luck…. The sleeping cat and each of Granny Betty’s fragile limbs located, we silently mouthed a count of three and sprang, yelling good mornings, onto the edge of the bed.

By the time Granny had rotated herself into a sitting position on the edge of the bed, we’d brought her a glass of water for her pills, checked her old pink slippers for scorpions, and fetched her turquoise quilted dressing gown from the hook on the door to the lounge…. As pre-agreed, Lulu and I slid in on either side of Grandpa. Very slowly, the covers pulled up to our necks, we untucked our shirts and each fished out a silky snake. Energetic from the warmth, the slim muscled body writhed in my hand as I slipped it, headfirst, into the sleeve of grandpa’s big cotton nightshirt.

Midsentence, Grandpa paused. He narrowed his eyes for a second, then continued, voice and expression unchanged. Damien gave Grandpa a progress update on the mud brick hut he was building in the bush; Lulu and I talked about the horses.

Grandpa nodded and commented attentively as usual. After a few minutes, he said, “So I heard a rumor you found some snakes. Now, I wonder what they are…Nonpoisonous I hope. Can’t be a rare species if you’ve got two…Oh, I know. Of course. Brown house snakes! Ya think you can scare me?” he yelled, fumbling under his shirt and retrieving a bewildered snake in each hand. “Ya should know better by now. Ya want scary. I’ll give you scary! Did I ever tell ya the story about Ronnie? Now that’s what I call scary!”