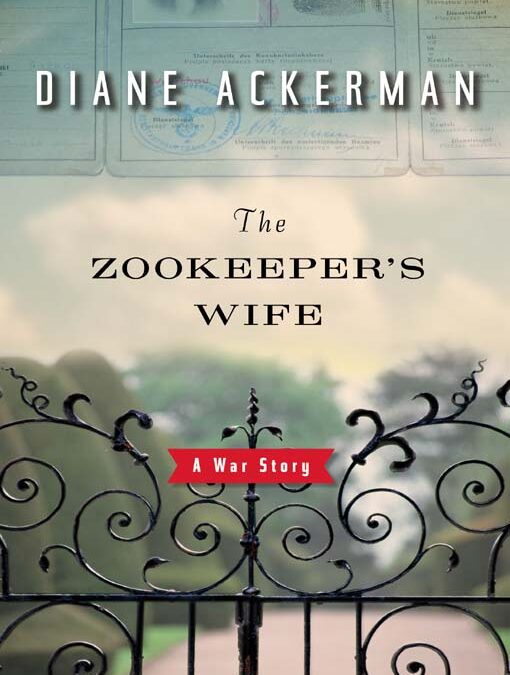 Commemorations are underway in Poland today to mark the 70th anniversary of World War II.  Coincidentally, I just finished a nonfiction book set in Warsaw during the war, and realized that today is the ideal day to review it.

As someone with ambivalent feelings toward zoos, I was reluctant to read this when I first heard about it. The title, and what little I had heard about it, gave me the mistaken impression that it was about a zookeeper’s attempts to save the animals in her zoo in Warsaw during World War II.  In fact, the majority of the zoo’s animals die pretty much in the beginning of the book when the war begins, and other animals play only minor roles in the story.

This is the true story of one family’s experiences in Warsaw during the war, and how they used the buildings in their zoo to provide hiding for hundreds of Jewish people passing through via the Underground. In Warsaw the punishment for harboring a Jew was immediate death for the entire family, but this didn’t deter Jan and Antonina Zabinski in the slightest, even though they were raising a young son and, later, a newborn.  Jan was even a key player in the resistance, going so far as to house fertilizer in plain view on the grounds, supposedly for the zoo’s garden, but actually for use as an ingredient in the explosives that derailed numerous German trains.

The book is full of fascinating and little-known historical information about the Nazis and their interest in certain animals, particularly those found in the Bialowieza forest. Apparently, the Nazis wanted to launch a breeding program to bring back certain extinct animals that they considered “pure”Ayran animals because they were prehistoric and untainted by racial mixing.  They were convinced that the extinct aurochs, for example, from which all modern cattle are descended, could be brought back by breeding only cattle that resemble the aurochs, and “working backwards” until the resurrection of the aurochs was achieved.  The Bialowieza forest was critical to their plan because it is the home of the Przywalski horse, which lives nowhere else on the planet and is the descendant of the extinct forest tarpin (likewise considered a pure Ayran animal). Ultimately, the Nazis’ intent was to provide pure, Ayran game for the Germans to hunt after the war.

This is one of those books in which it’s necessary to overlook some not-so-good writing (“‘It’s not my doing,’ Jan said calmly, with just the right mix of anguish and outrage.” and “She smacked Leist with a hard stare.”) in order to focus on a very worthwhile true story. Moments of the book are mesmerizing, and some of the vivid imagery of the war will remain with me for a long time. For example, the author describes the scene that greets Antonina on September 5, 1939, just four days after the bombing began, when she returns to the zoo from her country retreat:

On that clear day, the sky broke open and whistling fire hurtled down, cages exploded, moats rained upward, iron bars squealed as they wrenched apart. Wooden buildings collapsed, sucked down by heat. Glass and metal shards mutilated skin, feathers, hooves, and scales indiscriminately….  Miraculously, many animals escaped across the bridge, entering Old Town while the capital burned. People brave enough to stand by their windows, or unlucky enough to be outside, watched a biblical hallucination unfolding as the zoo emptied into Warsaw’s streets. Seals waddled along the banks of the Vistula, camels and llamas wandered down alleyways, hooves skidding on cobblestone, ostriches and antelope trotted beside foxes and wolves, anteaters called out hatchee, hatchee as they scuttled over bricks.

The writing isn’t too bad overall, but I was rather distracted by the author’s use of quote marks to signify precise words that Antonina wrote in her diary, letters, or post-war remembrances.  I’m all for quoted passages that are several sentences long, in order to provide Antonina’s own view of certain events, but random quoted words mixed into the author’s sentences are not illuminating, they’re just weird:

“Grazed by sadness,” she wondered what would become of them.
People seemed “distracted,” and “conversations stumbled.”

When the author incorporates Antonina’s written words into imagined dialogue, the effect is especially odd because her written words weren’t actually spoken aloud, they were written, after the fact, and they read that way:

Jan turned to Antonina, who looked faint. “I can’t breathe,” she said. “I feel like I’m drowning in a gray sea, like they’re flooding the whole city, washing away our past and people, dashing everything from the face of the earth.”

But I am glad I read the book, because much of it is moving.  I was especially affected by the section of the book dealing with the Warsaw Ghetto uprising in the spring of 1943, in which tens of thousands of Jewish people held off, for almost a month, the Germans’ attempt to transport them all to Treblinka. While the Ghetto burned, the people outside it carried on unperturbed:

“Nearby, on the other side of the wall, life flowed on as usual, as yesterday, as always,” one survivor wrote. “People, citizens of the capital, enjoyed themselves. They saw the smoke from the fires by day and the flames by night. A carousel went round and round beside the ghetto, children danced in a circle. It was charming. They were happy. Country girls visiting the capital rode on the roundabout, looking over the flames of the ghetto,” laughing, catching leaves of ash that floated their way, as a loud carnival tune played.