The Professor and the Madman 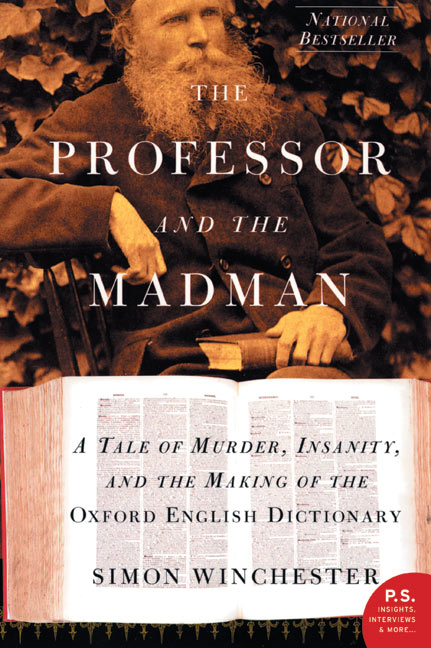 The Professor and the Madman: A Tale of Murder, Insanity, and the Making of the Oxford English Dictionary, by Simon Winchester. Harper Perennial (1998), 246 pages.

The making of the Oxford English Dictionary is more interesting than you might think. It was begun in 1857, but at the “great dictionary dinner” of 1897 only a few volumes covering A through C had been completed; thirty more years would pass before it was finally finished. This dictionary was the first of its kind in the world: a complete catalog of the English language that included every word in existence, including those no longer in use; the origin of the word, including quotations from its earliest known appearance in text; and the history of the life span of each word—how it evolved in meaning and pronunciation over time, illustrated with citations from literature. Naturally, this all took longer than initially expected. Rather than compiling the entire thing and publishing it as a whole, the dictionary’s many volumes were published as they were completed and many, many years apart: In 1888, the volume encompassing Bra through Byzen was published, and at the aforementioned dinner of 1897, attendees celebrated the publication of a new volume “embracing the entirety of the infuriating letter C, which the lexicographers found unusually filled with ambiguities and complexities….”

The most painstaking and complicated aspect was finding written citations that documented a word’s entrance into the language and provided, through context, a useable definition. The work of reading thousands of volumes of rare books and manuscripts, searching for and recording the use of every word contained within, obviously would require many thousands of volunteers. So, ads were printed in magazines throughout Britain and America, and thousands of random people on both sides of the Atlantic responded. For example, somebody noted that the word buffoon appears, in a nicely illustrative manner, on page 34 of a book published in 1639; so, the word buffoon, the sentence it appears in, the implied definition, and the title and author of the 1639 book were all copied onto a slip of paper and mailed to Oxford.

One person sent more citations than any other and for the longest period of time (about twenty years): the “madman” of the title, who was responsible for more than ten thousand definitions. He had plenty of time to do so because he was in a mental hospital for the criminally insane, having shot a man in London in 1872. At the hospital he had a private library of rare books and complete access to any other titles he asked for.

This is all interesting enough and the writing is good, yet the book drags a bit for reasons that are hard for me to put a finger on. Perhaps one of the problems is too much attention on the madman. His paranoia and delusions are mildly intriguing, and there’s a great scene of self-mutilation near the end of the book, but overall the amount of background research the author invests in him is perhaps overdone (comparatively, we know very little about everybody else in the book). Speculation about how his early sex life in Ceylon may have affected his mind…pages and pages of description about his experiences in America’s Civil War and whether or not they contributed to his madness…quoted passages from hospital records…details about the decoration of his cell…none of these things are necessarily problematic, but taken together all this research makes the book lean a bit too much toward being merely a biography of this forgettable crazy person.

EXCERPT:
Now he was warming to his theme: To chart the life of each word, he continued, to offer its biography, as it were, it is important to know just when the word was born, to have a record of the register of its birth. Not in the sense of when it was first spoken, of course—that, until the advent of the tape-recorder, could never be known—but when it was first written down. Any dictionary that was to be based on the historical principles that, Trench insisted, were the only truly valid ones had to have, for every word, a passage quoted from literature that showed where each word was used first.

And after that, and also for each word, there should be sentences that show the twists and turns of meanings—the way almost every word slips in its silvery, fishlike way, weaving this way and that, adding subtleties of nuance to itself, and then perhaps shedding them as the public mood dictates.