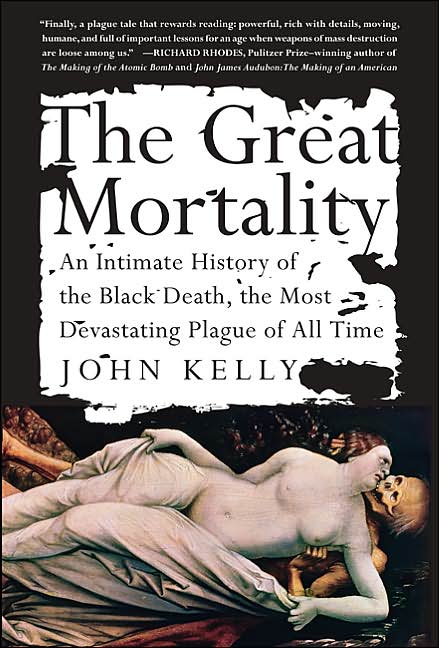 The Great Mortality: An Intimate History of the Black Death, the Most Devastating Plague of All Time, by John Kelly. HarperCollins (2005), 356 pages.

Thirty million people dead in Europe, a third of the Middle East wiped out, and China “depopulated.” Look no further for your definitive history of the Black Plague of 1347-1349: where it came from and how it spread (a map is included), what caused it, and, especially, the precise manner in which it killed. This book’s rich and diverse list of topics ranges from history (of China, Europe, Scandinavia, Russia, Turkey, Egypt) to the biology and behavior of rats, to the science of infectious diseases, to the chilling persecution of fourteenth-century Jews.

The greatest strength of the book is the way it brings the Middle Ages to life. With the help of countless varieties of primary source material (the book includes 37 pages of notes), the author describes in vivid detail the daily lives of medieval people before, during, and after the plague. Most of us know that living closely with rats was taken for granted, and that emptying chamber pots out the windows onto the streets was routine, but there are many, many other examples of grotesque and shocking characteristics of fourteenth-century life that the author colorfully and cheerfully paints for us. For example, on the lack of personal hygiene: “When the assassinated Tomas à Becket was stripped naked, an English chronicler reports that vermin ‘boiled over like water in a simmering cauldron’ from his body.” On the practice of butchering animals on public streets: “Since butchers rarely picked up after themselves either, in most cities the butchers’ district was a Goya-esque horror of animal remains. Rivers of blood seeped into nearby gardens and parks, and piles of hearts, livers, and intestines accumulated under the butchers’ bloody boots, attracting swarms of rats, flies, and street urchins.” And speaking of street urchins, I particularly appreciated details such as this: “Often, animals were abandoned where they fell, left to boil in the summer sun, to be picked over by rats and ransacked by neighborhood children, who yanked bones from decaying oxen and cows and carved them into dice.”  This eye for the gruesome and in-the-moment details keeps The Great Mortality lively and engrossing. I will never forget the children pulling out bloody bones to turn into toys. Everybody needs to read this book.

This review first appeared in June 2005
By Donna Long