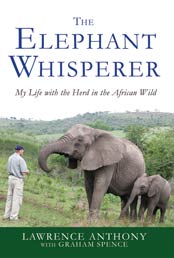 The Elephant Whisperer: My Life with the Herd in the African Wild, by Lawrence Anthony.  Thomas Dunne Books (2009), 368 pages.

Anthony tells the story here of his life on a game reserve in South Africa.  He makes a point in the prologue of letting us know that he is not the “elephant whisperer” the title suggests (which I was pleased to hear, as I am growing tired of all the “whisperer” claims) but that he did come to have a very special relationship with the elephants who live there.

In 1999 he was asked to take on a troubled herd of wild elephants that was living on another reserve. He was told that if he did not want them they (including several babies) would be shot because the matriarch had been repeatedly tearing down the electric fencing that was meant to contain them. Even though Anthony was not properly equipped to incorporate a herd of elephants, he could not bear the thought of them being killed and so agreed to have them moved to his reserve.

The owners of the former reserve shot the matriarch and her baby without telling Anthony (which we fortunately hear about after the fact and so do not have to suffer through reading about the actual event) and delivered to him a herd completely traumatized by having watched the slaughter of their family members. These elephants were even more hostile than before and wanted only to escape the reserve and get as far away from people as possible.  This led the new matriarch to take over where the old one left off—knocking trees down onto the electric fence and breaking out. The Park Authorities decided the herd had become uncontrollable and dangerous and they made it clear to Anthony that if the herd tore down the fence again, they would be shot.

The interactions between Anthony and the elephants, as he attempts to communicate to them that they must stay in the reserve or they will die, are what make this book worth reading. His descriptions of their behavior, the expressions on their faces, the way they touch him with their trunks, are simultaneously heart-breaking and awe-inspiring.  He made me desperately want an elephant of my own.

It must also be said, however, that the rest of The Elephant Whisperer (any chapter in which he is not writing specifically about the elephants) is not particularly well-written.  In fact it may well bore readers who require their nonfiction reading to be just as literary as their fiction.  But if you are an animal-lover, and in particular if you have an interest in inter-species communication, you won’t regret slogging through the pedestrian prose in order to get to know these elephants.