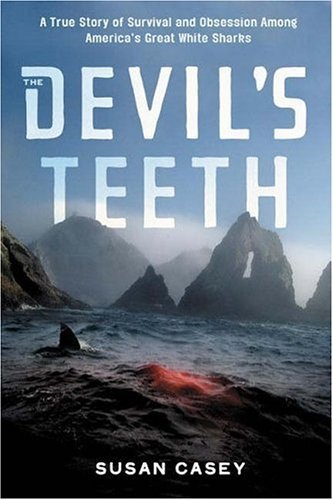 The Devil’s Teeth: A True Story of Obsession and Survival Among America’s Great White Sharks, by Susan Casey.  Henry Holt and Company (2005), 291 pages.

It’s not often I come across a nonfiction book that is a can’t-put-it-down, stay-up-all-night page turner. But this book about the Farallone Islands, the great white sharks who live there, and the researchers who study them is just such a book. It is filled with dramatic bloody attacks that I would have thought would make me feel sorry for the seal and sea lion victims, but the researchers’ stories about the sharks express such warmth and appreciation for the various shark personalities that I ended up being more worried about the great whites getting enough to eat than I was about the ones being eaten.

In addition Casey writes about the history of the other Farallone animal populations and the people who wiped them out. There was the decimation of the fur seals that began in 1807 and within two years had killed 73,000 animals, from a population of 40,000 per season to 54. The Farallone Egg Company came next, to harvest the hundreds of thousands of softball-sized murre eggs covering the rocks of the islands, using Italian immigrant “eggers” working under slave-labor-like conditions. Then the military showed up, deciding in 1916 to turn the Farallons into a fortress with harbors for torpedo ships and submarines and to ring the islands with sixteen-inch guns. Finally, in 1969, the Farallones were designated a National Wildlife Refuge and the Point Reyes Bird Observatory was contracted to repair the damage.

Upon finishing the book I found myself searching web sites for updates on the various sharks I had come to know, looking for Farallone photos, and in general becoming somewhat Farallone obsessed. I even wanted to move there, which is kind of insane given that the weather is everything I hate—foggy, wet, dreary, gray, and accessible only by a three- to six-hour boat ride often through nauseating ten-foot swells.

EXCERPT:
Every September, one of the world’s largest and densest congregations of great white sharks assembles in the waters surrounding the Farallon Islands, a 211-acre archipelago of ten islets in the Pacific, twenty-seven miles due west of the Golden Gate Bridge. No one fully understands what this gathering represents, why great whites, the ocean’s most solitary hunters, choose to reside for a period of time in such close quarters. What’s known for sure is that the sharks remain at this location for approximately three months. And this: having studied them for over a decade and a half in the Farallon White Shark Project, Scot Anderson and Peter Pyle have discovered that year after year, the same sharks return to exactly the same spot.

This annual reunion is at least partly about hunting. Despite strange inventories of items found in great white stomachs—a cuckoo clock, a fur cape, license plates and lobster traps, a buffalo head, an entire reindeer, and even, in one unlikely scenario, a man dressed in a full suit of armor—what these sharks really love to eat are seals. And the Farallones are dripping with seals—northern elephant seals, harbor seals, fur seals, seals, seals, seals—all barking and bellowing, draped on the rocks like a blubbery carpet.

This review first appeared in August 2005
By Cindy Blackett