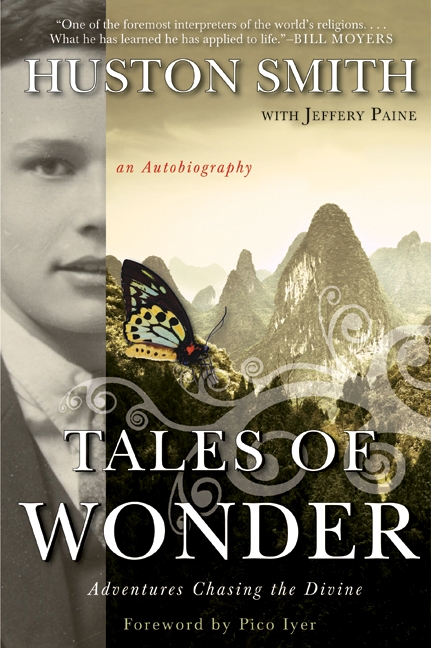 Huston Smith’s bestseller, The World’s Religions: Our Great Wisdom Traditions, was published in 1958 and remains (with over 2.5 million copies sold) one of the best-loved books on religion that has ever been written.  It is a remarkable departure from what one usually finds in comparative religion in that Smith speaks about each tradition from the inside, as if he had grown up within each religion, rather than from an academic or analytic perspective.  It is an extraordinary book and I have always wondered how Smith was able to write it in the way that he did.  His new autobiography, Tales of Wonder, answers that question.

Smith begins his story with his childhood in rural China.  He was born in Soochow in 1920, and lived there with his Christian missionary parents until he came to the United States to attend college.  Though he went to a Methodist college intending to return to China as a missionary himself, his study of theology in graduate school brought him into contact with a different way of looking at  Christianity—one that had “little use for church history, biblical authority, or supernatural revelation.”

A series of unlikely, yet in retrospect somehow inevitable, connections began to occur between Smith and the world of religion.  While doing research for his dissertation, he ran across a philosopher (Gerald Heard) whose work he found fascinating.  When he found out Heard was living in a monastery in a remote canyon near Los Angeles, he drove out to meet the man.  Heard said Smith might be interested in meeting a friend of his—Aldous Huxley.  Aldous Huxley said Smith really needed to meet a swami (Satprakashananada) who was living in St. Louis.  Smith looked up Satprakashananda in St. Louis, attended one of the discussions on the Upanishads, and found himself practicing Hinduism for the next ten years.

During this time he became a professor at a university in St. Louis, and was asked to appear on public television to teach his popular course on the world’s religions.  A few years later he received a letter from William Danforth (owner of Ralston Purina) who had seen the television series and wanted to buy Smith a round-the-world plane ticket to visit the countries he spoke about.  Never content to be a mere tourist, Smith took this opportunity (as he seems to take every opportunity) to immerse himself in new worlds.

“I trained with Zen roshis in Japan.  In India I practiced yoga with Hindu yogis.  I whirled with whirling dervishes in Iran.  In Mexico I sweated in sweat lodges and took peyote with the Huichols.  I meditated with Buddhist monks in Burma.  I camped with Aborigines in Australia.  I made a pilgrimage to Mount Athos, the Holy Mountain in Greece.  At a holy festival on the subcontinent among the millions of devotees and naked sadhus I wore only a dhoti under the blazing sun.”

After ten years of Hinduism, Smith practiced Buddhism for ten years and then Islam for another ten years, which cause some to think he was systematically working his way through each religion in order to better teach it.   But as Smith writes, this was not the case:

“When I discovered Hinduism and saw its beauty and profundity, I intended to practice it, a faithful devotee, forever.  But then when I encountered Buddhism and later Islam, and was dazzled by their heady possibilities, I had to try them on for size.  They fit.  The proper response to a great work of art is to enter into it as though there were nothing else in the world.”

This, I think, is the essence of what makes Smith’s writing, and his journey through life, so inspiring.  He embraces everything and he does it with a joy that is contagious.  Tales of Wonder is a must-read for spiritual seekers of every kind.