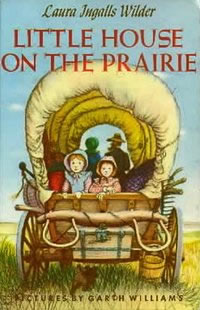 HarperCollins has made a horrendous, unfathomable decision that will surely be studied in future college marketing courses in the same chapter as the “New Coke” blunder of 1985.

In a woefully misguided attempt to keep the Little House series “relevant and vibrant” to kids today, all paperbacks, beginning this month, will now feature a hideous photographic cover that looks like a cheap television tie-in, and all of Garth Williams’s interior art will be removed! Have the editors gone insane? Have they ever heard of the word “classic”? Didn’t they read these books as children? They think a photograph of a girl in a garish red-and-blue dress straight from one of those “living history” tourist traps that attempts to recreate frontier towns from bygone eras will actually make the books more “vibrant”? More trashy, yes. But “relevant”? These new covers have no relevance to Laura Ingalls’s life whatsoever.

And how could anyone think that removing all of Williams’s one-of-a-kind, meticulously researched illustrations from the series could possibly be an improvement? Garth Williams met with Laura at length before beginning work in 1947, and afterwards he personally traveled to each of the books’ locales to take detailed notes. His work could not be more integral to these books. He and Laura herself collaborated on them together, for crying out loud! This is the worst, most depressing, most shockingly foolish publishing decision of the decade. This is immoral. This is criminal.

Booksellers, please join your colleague Alison Morris, children’s book buyer for Wellesley Booksmith in Wellesley, Massachusetts, who will not stock the newly designed series in her store. Put your foot down and do the same! Tell your customers to look for the originals on ebay, where classic Little House books in good condition will surely be available for many more years.

The insanity of the decision is made clear by reading (or attempting to read, since it makes no sense) the following statement from HarperCollins: “Laura Ingalls was a real little girl, not a made-up character. Using photographs highlights that these are not history but adventure books.”

Yes, Laura was a real girl, which is precisely why using a cheap-looking photograph of a child posing as Laura, taken 130 years later, makes no sense whatsoever!

Furthermore, I’m utterly unable to understand the claim that these books “are not history.” We agree that Laura was “a real little girl.” Well, that grounds her story in history, doesn’t it? HarperCollins is not interested in affirming the books’ historical significance? Why? Why?

I suppose an “adventure book” could be fiction, historical fiction, or nonfiction, so I’m not too troubled by the strange insistence that the series be thought of as “adventure,” but how does it follow that an ugly photo is more representative of “adventure”? Surely the original cover illustration of two little girls in a covered wagon, traveling across the prairie while their dog trots alongside, speaks far, far more to “adventure” than any modern photograph ever could. That statement from HarperCollins is nothing but garbled nonsense.

Please buy only the real books through used-book sellers.

This opinion first appeared in January 2007
By Donna Long