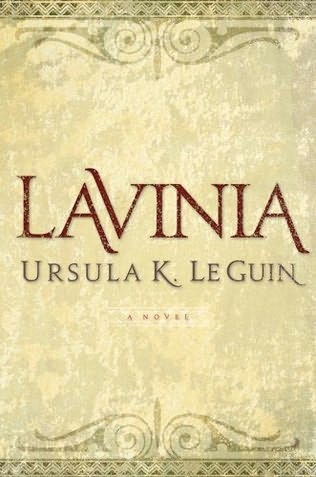 Rome has not yet been founded; it doesn’t even have a name but is referred to at times as the village of Seven Hills, where only a few farmers and shepherds live. To the southwest, on the coast, lives Lavinia, the daughter of a king who rules Latium (a region of ancient Italy).  Le Guin blends this historical setting with a specific piece of the story told in Vergil’s The Aeneid:  the Trojans have left Troy and are now sailing to Latium to fulfill a prophesy that Aeneas must marry Lavinia and lead a terrible war between the Trojans and the people of Latium.

The unique setting had me completely entranced at first: I was telling friends they must read it, I was spending time researching pre-Roman history to see how accurate the descriptions were, and I was carrying it around with me wherever I went. These are usually the signs of an award-winner, but…it all falls apart in the last 75 pages or so. Part of the problem is with plot and pacing, both of which slow down considerably: the war is over, the king is dead, there’s a strong sense that there’s nothing else left to say, nothing else left to happen, but the author clearly intends to bring us all the way up to Lavinia’s death of old age, just because.

The other problem is that the writing actually changes toward the end. What had been quite good writing turns genre-ish, specifically the bad historical-fiction variety in which people’s eyes “flash,” a sex scene or two is thrown in, and people are saying things “wryly” and “drily.” This is a strange phenomenon that seems to be prevalent in genre writing. There must be a word for it, but I don’t know what it is—this meticulous focus on the way each person says a thing. Ideally, a thing that is said should be interesting enough to just be said; if we have to be told it was said “drily” or “wryly,” there’s a problem—the foremost being that in stopping to puzzle over how exactly a person says something “wryly” (does the face pucker up a bit?), I’m pulled out of the story.

I had higher expectations because I know that Le Guin writes quality children’s books and she’s won countless awards—even a National Book Award, as I learned from the back cover of Lavinia. I went online to find out which book had won the award, and found that she has collected over fifty awards. Tellingly, however, they seem to be entirely for genre writing with the exception of her National Book Award, which was for a young adult book (makes sense).

My recommendation is mixed. People who love The Aeneid should certainly read this, as should anybody with a particular interest in ancient Italian history, Roman legends, and/or the Trojans.  I’m glad I read the first half, but I’m also grateful I borrowed instead of bought it. So if, like me, you would love to read about a young girl growing up over two thousand years ago in the wilds of Italy where there are still bear and wolves and the people worship pagan gods, then it will be well worth your time to borrow Lavinia from a library rather than buy it, and just plan to stop reading on page 181.

EXCERPT:
(from the good half)
If my daughter had lived she never could have run safe and free through fields outside our domains or along the hillsides among the grazing herds, as I used to run. When my son was a boy the forests were safer for him than the pagus fields. But when I was a girl I walked the open hillsides and the wilderness paths to Albunea with no companion but Maruna. Sometimes she accompanied me all the way, sometimes she stayed the night with a woodcutter’s family at the edge of the forest while I went alone to the sacred glade. We could do this because the peace my father had brought to Latium was real and durable. In that peace, little children could watch the cattle, shepherds could let their flocks wander in the summer pastures with no risk of theft, women and girls need not go guarded or in bands but could walk without fear on any path in Latium. Even in the true wild where there were no paths we were afraid of wolf and boar, not man. Because this order had held all my life as a girl, I thought it was the way the world had always been and would be. I had not learned how peace galls men, how they gather impatient rage against it as it continues, how even while they pray the powers for peace, they work against it and make certain it will be broken and give way to battle, slaughter, rape, and waste. Of all the greater powers the one I fear most is the one I cannot worship, the one who walks the boundary, the one who sets the ram on the ewe, and the bull on the heifer, and the sword in the farmer’s hand: Mavors, Marmor, Mars.

EXCERPT:
(from the bad half)
I could not speak, but blushed the way I do, turning red all over. He saw and felt that and kissed me, gently at first, but with arousing passion. We were in the small courtyard of our house, no one about. “Come on, come!” he said, and still red as fire I followed him into our bedroom, where the conversation took a different form.