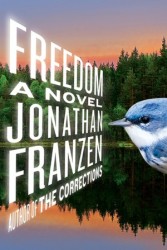 Much like my favorite story-tellers of the 19th century  (Tolstoy, Flaubert, Austen, the Brontes) Franzen begins his novels with the description of a family, and then simply follows each of the members as they go about their lives. I picked up Freedom (and The Corrections before it) secure in the knowledge that I would not be subjected to any of the annoying post-modern, hip, experimental nonsense that is too often acclaimed as fine literature. I was not disappointed in this regard. Franzen has a real gift for capturing the reader’s attention from the first page with a classic, simple style. He reveals his characters’ inner lives through just a few descriptive details, he brings the cadence and pacing of real conversation to the written word brilliantly, and he does family dialogue (particularly sibling conflict) like nobody else can.

Unfortunately, however, along with Franzen’s dazzling ability to create one perfectly realized character after another, his greatest weakness as a writer—trying to cram too many ideas into one book—is on full display here as well. There are too many themes (gentrification, the plight of migratory birds, mountaintop removal, consumerism, Iraqi war profiteering, just to name a few) competing for attention and intruding on the story of the family, and when he does focus on the family, he gives the reader far too much backstory on irrelevant secondary characters.

Patty and Walter Berglund, their children Jessica and Joey, and Walter’s best friend from college, Richard, form the center of Freedom. These are the people Franzen made me care about from the first paragraph. I was willing to follow them anywhere, including going back in time to meet Patty’s college roommate, Walter and Patty’s parents, even Walter’s father’s father, because it seemed important in understanding more about the internal workings of the characters. But when Franzen started wandering off into extended portraits of Joey’s roommate’s sister, or the son of the guy who hired Richard to work on his roof, and when it became clear that these characters would never be heard from again, I couldn’t help but lose interest. I felt a bit like a guest at a dinner party who had been promised a seat next to Bill Clinton, but had somehow become locked outside the house and was now stuck listening to the teenage parking attendant talk about video games.

In addition, there is a serious problem with chapter two in which Patty has written her autobiography. It’s great writing, and fun to read, but it sounds exactly the same as the chapter before it and all of those after it. Franzen has done nothing to make Patty’s voice distinct from his (the omniscient narrator) which makes it impossible to believe that Patty has written it. This is a serious flaw since the autobiography and its discovery by Walter plays a pivotal role in one of the story’s main turning points.

I enjoyed reading Freedom, but it is not as good as The Corrections. The plot simply meanders around in too many different directions which detracts from Franzen’s real talent, the thing that makes his writing so special—that of a family and their relationships with each other.

And now a few words about the cover. I wish I could simply say WTF?? But for the sake of those of us who still buy actual books (as opposed to the soul-destroying e-book) and care about the covers on those books, I will elaborate.  It is as if the editor said to the art director, “Hey we need a cover for the guy who wrote The Corrections. We should probably use the same font for the title and there should be a cerulean warbler and some trees. Oh, and a lake.” And then the art director (who is either completely incompetent or hates his job) just threw all four of those items onto the cover and called it a day. My ten-year-old niece could have designed a better cover than this with nothing but Photoshop and an hour before bedtime in which to complete it. Probably she wouldn’t even need Photoshop—a few colored pencils would do.

I searched for covers in other countries in hopes of finding an example of what the image could have been if someone had applied even the smallest amount of effort to the task, but was able to find only the equally pitiful UK cover shown at the top of this review next to the US version. It’s not quite as bad, in that the feather is a reference to birds rather than the predictable actual bird image, but what’s the deal with the giant blocky letters? Could no one in either country come up with anything else? Is there some sort of feud between Franzen and cover art directors across the globe? I suspect one of them must have taken offense to something he said (similarly to the overly sensitive Oprah) and now Franzen is being punished with the worst cover of the year.

EXCERPT:
The catalyst in Carol’s case was the new boyfriend, Blake, a goateed young backhoe operator she’d met across the counter at the license bureau, and for whom she dramatically changed her look. Out went the complicated hair and escort-service dresses, in came snug pants, a simple shag cut, and less makeup. A Carol nobody had ever seen, an actually happy Carol, hopped buoyantly from Blake’s F-250 pickup, letting anthem rock throb up and down the street, and slammed the passenger-side door with a mighty push. Soon Blake began spending nights at her house, shuffling around in a Vikings jersey with his work boots unlaced and a beer can in his fist, and before long he was chainsawing every tree in her back yard and running wild with a rented backhoe. On the bumper of his truck were the words I’M WHITE AND I VOTE.