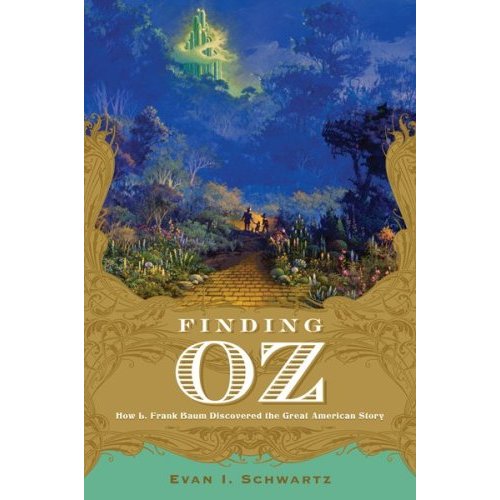 In many respects this is a biography of L. Frank Baum, with immensely enjoyable stories about his family history, his early childhood in the outskirts of Syracuse, New York, and his marriage and numerous attempts to procure financial security for his family through various odd jobs in South Dakota and Chicago. The straightforward biographical aspects of the book should interest anybody who enjoys late-1800s history, and should particularly be read by anybody curious about the women’s rights movement, the Chicago World’s Fair, Theosophy, and, of course, the Oz books.

The problem is that this isn’t a straightforward biography—it is largely an exploration of the hidden meanings within the story of the Wizard of Oz. If you like being told that characters you had always taken at face value are actually metaphors, or stand-ins for actual historical figures, then this is the book for you. If, however, you are the sort of person who was terribly distraught to learn that the Narnia series is actually all about Christianity, then Finding Oz may upset you. The Narnia books were among my favorites as a child, but I never recovered from learning, a few years after reading them, that Aslan is actually Jesus, and as a result I’ve never had any desire to revisit the series. Finding Oz comes perilously close to having the same effect, so proceed with caution.

First, here are some happy biographical tidbits from Baum’s life:

Baum’s childhood home was an enormous farmhouse on several acres, and as a young man he turned the estate’s chicken coops into an egg business—his first real job. Fans of the Oz books will recall that the only way to harm the Nome King is to throw eggs at him; Evan Schwartz notes that “references to chickens and eggs would appear somewhere in nearly every book written by Frank Baum.” Frank was a constant daydreamer, and apparently spent much of his time with the hens and roosters imagining that they were talking to him, which explains Billina the talking chicken.

This childhood home was situated right next to a long road that was famous throughout New York. Plank Road was a sixteen-mile road made of wood that was the first of its kind in the US. It enabled people to transport a variety of goods up the Erie Canal without getting stuck in the mud, and young Frank spent hours watching travelers pass by his house on this magical road. “The vision of this special path had to be imprinted in his mind….”

At the age of thirteen, he was sent away to an academy in Peekskill, New York, where many of the roads were made of bright yellow bricks. “There were yellow brick roads all around town, especially near the waterfront, including a stretch by the old docks that still survives today. So if Frank had asked someone for directions from the dock to the academy up the hill, their answer would have been quite simple….”

Baum’s mother-in-law Matilda Gage was a founding member of the women’s rights movement who worked closely with both Susan B. Anthony and Elizabeth Cady Stanton, even authoring an important book with Anthony before they had a serious falling out. As a nationally known activist, she spoke passionately and frequently about how religion is to blame for the persecution of women, a view for which she was scorned and ridiculed throughout the country. She was a rather domineering figure in Baum’s life, and Evan Schwartz makes the case that she became the prototype for all four of Oz’s witches—the wicked and the good. It’s a shame Matilda has been overlooked by history. Anybody interested in the earliest beginnings of women’s suffrage should read this book just for her story.

The Chicago World’s Fair of 1893 was also incredibly critical in shaping Baum, his family, and his books. In short, it is the Emerald City. The inspiration for the need to don green eyeglasses in the Emerald City came from the fact that all of the buildings for the expo were finished in bright, gleaming white, giving rise to its nickname The White City. “Colored eyeshades had been sold at the Chicago World’s Fair for the very purpose of blocking the blinding brightness of the White City.” This fair was also the stage for the first speaking appearance of Swami Vivekananda, who went on to found Vedanta societies throughout the country (there are over 200 of them going strong today). As it happens, Matilda Gage had recently become entranced with Theosophy, a new form of spirituality based on Eastern philosophy. With Vivekananda’s arrival from India, the Baum family became followers of his philosophies.

This is where the book takes an unpleasant turn. Apparently, the Oz characters’ needs for a brain, heart, and courage are not random cute ideas but paths toward contact with “our true Self” as laid out by the Swami:

The first is the Jnâna Yoga, a meditation on what it means for one’s brain to receive wisdom.

The second is the Bhakti Yoga, a meditation on what it means for one’s heart to know compassion and devotion.

The third is the Karma Yoga, a meditation on what it means to gain the courage to take action.

There’s much, much more explanation of how all this fits into Oz, including why Toto is called Toto, where/why hot air balloons come into play, and who the Cowardly Lion really is: the Native American Sitting Bull, “the Lion of the Lakota.” (Native Americans play a huge role in Finding Oz. I won’t go into it all here, except to say that our treatment of Native Americans in the late 1800s had a life-changing effect on both Matilda and Frank, and several chapters of this book are devoted to explaining this history and the Baum family’s reactions.)

Is it just me, or does The Wizard of Oz lose some magic with all this explanation and analysis? If you don’t think so, then by all means buy this book, because it’s well written and well researched. If you do think so, then stop reading this review right now, because now I’m going to reveal who the Wizard actually is:

There are four distinct sides to the mysterious character, each inspired by a historical character with whom Frank Baum crossed paths in real life. At first the Wizard is a figure of pure wonder and imagination, not unlike the Wizard of Menlo Park, a wonderful man capable of great feats, including an ability to project a photorealistic moving image of himself onto a screen—the very same invention that Thomas Edison promised he would reveal at the Exposition. Significantly, Edison is the only living figure that Baum mentions in any of his Oz novels. But the Enormous Head quickly turns mean and terrible. Dorothy notes that “there was no hair upon his head,” a likely reference to John D. Rockefeller and his alopecia…. The all-consuming greed and materialism of Rockefeller also seem to be referenced when the Great Oz demands payment for granting any request…. The Great Wizard is now exposed as a fraud who breaks down and admits, “I am a humbug!” With this revelation the story evokes P.T. Barnum, that most famous purveyor fraudulent amusements, the self-proclaimed Prince of Humbug….

The fourth historical character is the aforementioned Vivekananda. Each of these four “sides” to the Wizard is laid out with such convincing evidence that I do not doubt Evan Schwartz’s conclusions at all, and I have to admit the explanations are quite interesting, especially those that detail P.T. Barnum. If you’ve never heard of the Cardiff Giant, that section of the book is a must-read (pages 137-139).

Overall, there is much here of historical and biographical interest, but I’m afraid all the Swami stuff has ruined a bit of the (previously) simple magic of Oz.