Eye of My Heart 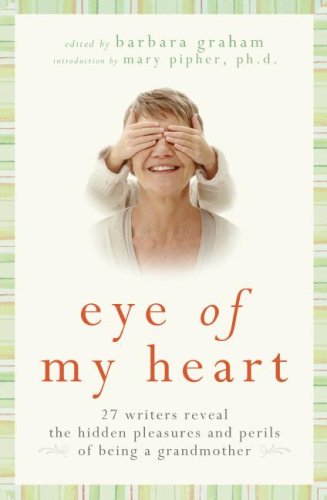 Eye of My Heart:  27 Writers Reveal the Hidden Pleasures and Perils of Being a Grandmother, Barbara Graham, editor.  Harper (2009), 298 pages.

This collection of essays is exactly what the title promises—a whole bunch of grandmothers writing about their experiences as grandparents.  Because the stories are all very well-written, I have only positive things to say about each of them individually.  Taken together, however, they can become repetitive and even a little boring.  They are best read, therefore, a few at a time rather than all in one sitting. The stand-outs are the essays that depart from the usual adoration of the perfect grandchildren, and speak instead about difficulties.

Sallie Tisdale writes ones of those stories, about her adopted son and his girlfriend, living on welfare, and having a succession of babies they can’t afford:  “When our granddaughter Taylor, is born, I sink into a dispirited silence for days, unable to celebrate this birth.  It seems to be the birth of a cycle of poverty, a future of small apartments and dead-end jobs.  Rafael stays home with the children.  Corina finally starts school again. My husband slips them twenety-dollar bills.  I bring disappointing, grandmotherly presents: pajamas, shoes, books.”

Claire Roberts, in When Things Go Tilt, is an estranged mother who lives just ten miles away from her son, but only goes to his house when one of the granddaughters calls:  “I pull up hoping she’ll see me and come outside but this rarely happens.  I think Emma believes that by forcing me to come to the house, she can somehow be the catalyst for detente.  Both she and Gracie understand that there’s ‘a situation’ with Gramma and their mother—and, therefore, with their father, too.”

Other themes in the “difficult” category include competition with the other grandmother, discovering that taking care of the grandchild can actually become boring, and the insecure position one is in when your grandchild’s mother is your daughter-in-law, rather than your daughter.