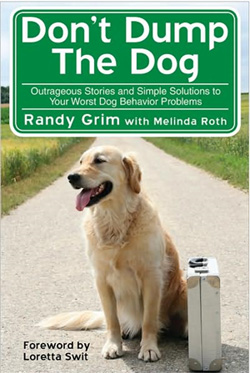 This book on dog training is an unusual addition to the category.  Instead of the conventional attitude of empathy and patience for the beleaguered dog owner, Grim writes with unapologetic irritation and sarcasm toward those who would give up their dogs.  This is not only understandable—he runs a rescue shelter and gets numerous calls a day from people trying to get him to take their dogs for the most trivial of reasons—but also quite refreshing.  There are so many books (both fiction and nonfiction) that are written in an attempt to alleviate one’s guilt over dumping a “difficult” dog, Grim’s book stands out as the voice of truth in a crowd of apologists.

To “Couch Potato Man” he writes:

If you wanted a dog who sat next to your wife on the couch and watched television, you should have gotten a Gund. They are soft and cuddly, and don’t need to be walked.

To those who say they must move he responds:

Good for you. Take the dog with you. If your new apartment won’t allow pets, find one that does. This is where I can’t fix stupid.

And to another complaining, “I didn’t know how much time having a dog would require,” he says:

Too bad. If you adopted him, live up to your responsibilities and make time.

Each chapter deals with a different dog issue—peeing in the house, dog aggression, barking, separation anxiety, high energy—and unlike many training books that are heavy on long explanations and complicated instructions, Grim gives very good advice on a variety of dog problems in a simple, easy-to-follow manner. He also de-bunks the “alpha roll” and other physically aggressive ways of disciplining dogs and comes across as the best alternative I have yet seen for those of you who object to the “leash pops,” etc. of  that other Dog Whisperer.

In addition, Grim gives the reader a good idea of what it is like to run a rescue center and of the problems particular to dealing with rescues that were all former strays (either feral or abandoned dogs) and are dealing with some really serious issues.  Given the kinds of dogs Grim takes on and refuses to give up on, he has earned the right to blame the dog dumpers rather than the dogs.

Because Dodger and Bud were feral dogs, we couldn’t just keep them at the shelter and hope for the best. Truly wild dogs like them are the ultimate shy, overly submissive cases—their fear of humans is what kept them alive—so socializing them, or any shy dog, into the human pack requires pathological patience, because no matter how kind you are to them, no matter how many treats, hugs, or whispers of assurance you give them, they still act as if you’re about to kill them.

Grim also makes a good case for accepting that most dogs have limitations and that sometimes your job is not to keep trying to make him perfect, but to learn to live with the dog as he is.  This is must-read advice for all those people with aggressive dogs who keep trying to take them to the off-leash dog park.

Though there is obviously much that I appreciate about this book I do have to note that the cover is a disaster.  The “amusing” image of a dog sitting alone on a street with his suitcase completely contradicts the message of the book itself.  In addition the font (which I guess is supposed to mimic a highway sign?) and the green color are extremely unappealing.

EXCERPT:
I know how much you love this dog and want him to be “normal.” If he could just run and play with the others, you’re sure he’d learn to adjust. I know how many books you’ve read and programs you’ve watched and Web sites you’ve scanned, and how many times you’ve tried, really tried to follow the advice, just to watch him fail again and again. After a while, you even get superstitious about it and wonder whether it has something to do with the food you’re feeding him or the feng-shui-ness of your house or some weird trajectory of an undiscovered comet zooming through the House of Pluto. Is there lead in his toys? Is his collar too tight? Does it have anything to do with his vaccinations?…

Once you accept your dog for who he is, whatever mental gymnastics it takes, it’s simply a matter of adjusting a few things in your life, and my job is done. First, be realistic about your dog and who he is, and love him like your mom is supposed to love you. If you counter-condition him with hot dogs as explained earlier and can walk him down the street or through the park or into the vet’s office without any scenes, then you’ve accomplished more than 95 percent of parents with aggressive dogs ever accomplish.