Cartwheels in a Sari 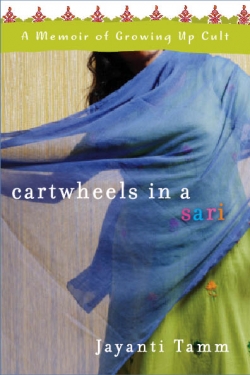 In the memoir category, stories of being brought up in a cult are hard to beat.  The craziness surpasses anything one would find in a really good, regular crazy-family-memoir (Running with Scissors for example) because there is an entire community of people, thousands of people, participating in the madness.

Tamm’s story is an excellent example of this.  Her mother became a follower of  Sri Chinmoy (aka “Guru”) in 1969 and was almost immediately joined in “divine marriage” (no sex allowed) to another disciple.  Her parents broke the no-sex rule—Tamm being the result— and Chinmoy, rather than kicking them out, announced that he had “contacted the ‘highest heaven’ and arranged for a special soul to incarnate as his chosen disciple” and that this baby was “the only soul to have been personally invited, selected, or commanded to incarnate into his realm on earth.”

Although Tamm was known as the “Golden Child” or the “Chosen One” she was not exempt from the criticism and humiliation that all of Chinmoy’s followers endured.  She played a re-made version of Chutes and Ladders, called “Disciple Chutes and Ladders” in which one tried to avoid landing on spaces like, “Did Not Meditate Soulfully—Go back ten spaces.”  Her parents signed her up for a special gift from Guru in which disciples stand in front of Guru while he writes down their “worst quality.”  (Tamm’s was “Deliberate disobedience on the lower-vital plane.”) She was given the job of cleaning out the cages in Chinmoy’s “zoo”—a collection of miserable animals housed in a squalid, roach-infested, series of rooms that had been dug out underneath the basement.  And she would have had to participate in Chinmoy’s “ugliest girl” contest, had she not had the good fortune to be sick on that particular day.

I am sad to report however, that all of this prime memoir material is wasted in Tamm’s hands as there is simply no voice to this story.  I can’t hear or feel the child she is speaking as, I have no sense of her as person at all, or of anyone else in the story for that matter, and the writing is consistently flat and uninspired.  In the prologue Tamm tells us that six years after she left the cult, an emissary of  Chinmoy calls to tell her that Guru says she is in mortal danger of an attack by an unseen force and that the only way to save herself is to pray to Guru every hour for the next two months.  The fact that Tamm follows these instructions precisely suggests that perhaps she does not yet have the perspective necessary to tell this story well, and may be the answer to the lack of any real presence in the memoir.

De-bunking a cult is always a worthwhile endeavor, and I appreciate Tamm’s desire to write this book, but I was bored reading it.  How such a story could be made boring is hard to imagine, but there it is.  Readers looking for information about cults might find this book helpful in some way, but those hoping to read a literary memoir are going to be very disappointed.