I Love Yous Are for White People 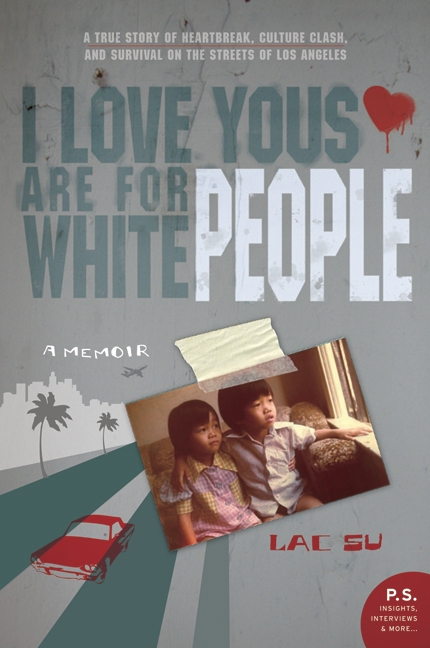 I Love Yous Are for White People, by Lac Su. Harper Perennial (2009), 249 pages.
Lac Su has a compelling story to tell in this memoir: As a five-year-old he escaped Vietnam under gunfire with his parents and little sister, they began life in America living in a roach-infested hotel in one of the poorest parts of Los Angeles, he was repeatedly humiliated and beaten by his father, and he joined an Asian gang.

Unfortunately, all of this is told with a lack of self-awareness or ability to give context and meaning to the events taking place.  Su does acknowledge his feelings (unlike many male memoirists) and is able to write that something has made him feel sad, angry, or ashamed, but it comes across as flat and simplistic.

He writes about stealing money from his mom’s piggy bank, for example, to fund the video-game-playing of a teenager in the neighborhood he is trying to befriend.  As a reader watching him take a one-dollar bill, then the next day a ten, and then a twenty, I became more and more horrified, knowing how much sacrifice and hope that money represented to his parents. When his father finally finds out and then we the readers find out the total amount stolen (five hundred dollars!) I actually gasped. Su is beaten, stripped naked, and locked outside.  And then the chapter ends. No further mention is made of this incident.

Su makes it clear he felt humiliated and that this was a terrible moment in his life, but I have no sense of the bigger picture. And I find it hard to believe there was not a more complicated mix of feelings going on. What was his mother’s reaction? How did his siblings feel about it? What is Su’s perspective now, as a man in his thirties, of what this money meant to his family? He tells us the neighbors laughed and jeered at him when they saw him locked outside naked. Does he have any feelings about this?  I shouldn’t be left to imagine and wonder about all of this. In order for a memoir to be of interest to the general reader, it must be more than a re-telling of the facts of one’s life and it must include a broader perspective than Su has been able to manage here.

It may be that first-generation Asian Americans who are looking for stories that mirror some of their own experiences will find this memoir worthwhile—the writing after all is not terrible, just one-dimensional—but for the literary reader it will be a disappointment.

Note: Be aware that Su has written about eating dogs while visiting Vietnam.  It is a sickening and painful scene to read and Su adds nothing to our understanding of this tradition, or of his own feelings about it, to make suffering through reading it worthwhile.  He hears the dogs being killed in the back alley, has a moment of doubt, and then walks into the restaurant and eats five different dog dishes while patting himself on the back for being such a brave and “real” Vietnamese. I was so disgusted with him for the manner in which he wrote about this that I reduced what had already become a two-star review in my mind to a one.

EXCERPT:
My mother was the first to leave her family in Vietnam. My father was a capitalist and a soldier for the South, making him a marked man when the war ended. He was forced to leave the war-torn country, even if it meant leaving everything and everyone in his life behind. The thought of leaving her parents, her nine younger brothers, and her baby sister behind was excruciating for Ma. Her family, especially her mother, Ne, depended on her.

Ma knew she would never separate from her children, but that required her to choose the family she built over the one that God created for her. Her family didn’t believe that she would leave Vietnam, but when she asked her brothers to make the journey with us, they knew she was serious. Ma’s family accused her of being disloyal and without honor. In the days before we made our escape, they disowned her and refused to acknowledge Quy and me as their blood.