The Miraculous Journey of Edward Tulane 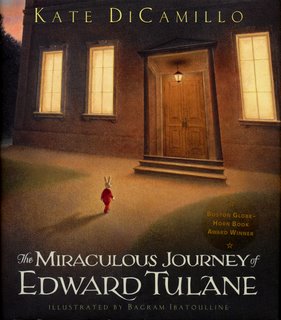 (This review first appeared in March 2007)

This is the rare children’s book that works just as well for adults as it does for children. It is also beautifully designed, with pencil and full-color illustrations that are simply delightful and are sure to contribute to this book becoming a classic. The Miraculous Journey of Edward Tulane is the story of a china rabbit who is exceedingly self-absorbed, selfish, and spoiled by the little girl who owns him. He gets lost, survives a series of misfortunes and tragedies, and finally learns to love. We, along with Edward, are reminded that to love is to suffer, but we must open our hearts regardless, again and again.

As was to be expected, Edward Tulane exacted much attention onboard the ship. “What a singular rabbit,” said an elderly lady with three strings of pearls wrapped around her neck. She bent down to look more closely at Edward. “Thank you,” said Abilene. Several little girls onboard gave Edward deep glances full of longing. They asked Abilene if they might hold him.

“No,” said Abilene, “I’m afraid that he’s not the kind of rabbit who likes to be held by strangers.”

“What does he do?” Martin asked Abilene on their second day at sea. He pointed at Edward who was sitting on a deck chair with his long legs stretched in front of him.

“He doesn’t do anything,” said Abilene.

“Does he wind up somewhere?” asked Amos.

“What’s the point of him then?” said Martin.

“The point is that he is Edward,” said Abilene.

“That’s not much of a point,” said Amos. “It’s not,” agreed Martin. And then, after a long thoughtful pause, he said, “I wouldn’t let anybody dress me like that.”

“Me neither,” said Amos.

“Do his clothes come off?” asked Martin.

“Of course they do,” said Abilene. “He has many different outfits. And he has his own pajamas too. They are made of silk.”