The End of the Line 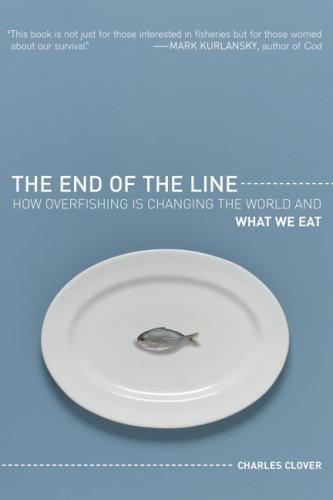 The End of the Line: How Overfishing Is Changing the World and What We Eat, by Charles Clover.  The New Press (2006), 384 pages.

I tried so hard to like this book because the topic is unquestionably important and I wanted to learn whatever the author had to say, but I became bored and couldn’t quite finish. I almost succeeded, getting to within fifty pages of the end but skimming the rest. Parts of it were attention-grabbing, but there was an overarching problem: the author didn’t quite succeed in bringing the fish fully to life. Where are the thorough descriptions of what the fish are like in their natural habitats? How do they behave? What do they do with themselves throughout their life? What are their quirky, endearing habits? Drawings would have been enormously helpful; dozens of obscure species are mentioned and I have no idea what they look like. Maps of where in the seas they live/migrate would have been nice too. There are tidbits here and there that are tantalizing and there’s certainly plenty of need-to-know information, but reading it didn’t provide enough pleasure for me to want to keep the book…I gave it away instead.

I can’t help but compare this to Fruitless Fall, another book about a looming environmental catastrophe that I happened to read within a few weeks of The End of the Line. Both contain timely and vital natural science for the layperson, and both concern animals that are critical to our food supply. Unimaginably critical, really—the colony collapse disorder affecting bees (the subject of Fruitless Fall) could easily bring down our entire agricultural industry as we know it. Fruitless Fall succeeds where The End of the Line fails in that while reading about the bees, I came to care about them in a way I hadn’t before. (Not just because we’re dependent on them, but because of who they are as a species.) I care about colony collapse, and the science behind it is fascinating, but equally important is that the bees come alive in the writing. In thinking about these two books together, I realized that that’s the crux of the problem with The End of the Line—the animals in it are somehow not fully alive in the same way that the bees are. It should have been doable—after all, there are dozens of species mentioned, all with quite different appearances, habits, and idiosyncrasies. And yet, at the end of the book, the fish remained, for me, rather abstract. I understand that I need to stop eating many of them, but I haven’t come to understand or care about them any differently.

I don’t mean to imply that the writing is bad. Actually, for the most part, the writing is quite good (see below); it’s just that the good writing couldn’t sustain itself for over 300 pages, and ultimately it failed to bring the fish completely to life.

EXCERPT:
The square-jawed fisherman on the Gloucester memorial is how the city still likes to think of itself. There is even a new incarnation of him on the big yellow sign of Gorton’s of Gloucester, the largest fish-processing firm left in town, on the Harbor Loop. His cutout figure rises above the rectangular Gorton’s sign, which tells you that the company was founded in 1849. Yet there is a rich irony here.

Gloucester has an important, perhaps preeminent place in the history of food preserving in the modern era as well as fishing. For it was here in the 1920s that Clarence Birdseye, considered to be the father of the frozen food business, first built a plant after perfecting flash-freezing techniques in his kitchen…. Birdseye chose the site for his plant because it was close to large amounts of cheap and highly perishable fish, the value of which he would prolong by freezing. So I rather expected Gorton’s of Gloucester to say it got its succulent fillets of white-fleshed fish just across the road at the Gloucester Fish Exchange, the daily fish auction.

There’s no mention in Gorton’s literature or on its Web site of where its fish comes from, even though both tell you that the company’s fillets come grilled, breaded, and beer-battered, with a variety of flavorings. A helpful employee let me in on the secret. The fillets contain Alaskan pollock, caught and processed by American companies in Alaska and then shipped several thousand miles around the continent frozen in containers. Gorton’s also sources its pollock from the Russian side of the Bering Sea, which is processed first in China. It imports farmed shrimp from South America and Asia and assorted other species of fish from elsewhere around the world. The reality of present day Gloucester is that the port has not been able to supply the volume of fish Gorton’s requires since the mid-1980s—because of the collapse of New England’s fisheries. American consumers now eat more imported fish than fish produced at home.

There is no memorial in Gloucester, as yet, to the bounty of nature that once existed, the profusion of shad, alewives, scup, menhaden, sturgeon, and salmon the founders encountered when they reached the shores of America. Nor is there one to the whales that existed a century ago or the giant halibut, barndoor skate, and much larger shoals of giant bluefin tuna that existed even within living memory. You might think there was a call for some such commemoration, since every visitor who has heard of the contribution the cod made to New England’s early prosperity and campaign for independence must wonder what happened. Perhaps it remains a sensitive subject.