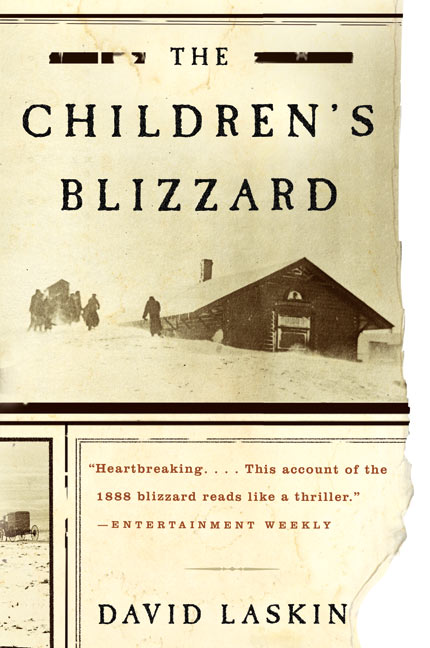 From On the Banks of Plum Creek, by Laura Ingalls Wilder:
“Then I’d better get the wood up before we go to town,” said Pa. “I don’t like the sound of that wind, and they tell me that Minnesota blizzards come up fast and sudden. I heard of some folks that went to town and a blizzard came up so quickly they couldn’t get back. Their children at home burned all the furniture, but they froze stark stiff before the blizzard cleared up enough so the folks could get home.”

Who doesn’t remember the lessons learned in the Little House books—the breathtaking danger of the prairie and the way in which a bright blue sky can darken in a second, engulfing children on their way to or from school? Anybody who loved this series simply must read The Children’s Blizzard. It’s a whole book devoted to one blizzard, which occurred on January 12, 1888, across Minnesota, Dakota Territory, Nebraska, and Iowa.  This was not one of Laura’s childhood blizzards—she was twenty-one in 1888—but it was a truly epic blizzard that killed several hundred people, most of them children. Within days it had been dubbed “The Schoolchildren’s Blizzard,” because throughout the region all the children headed across the prairie to school that morning without any warm clothes, rejoicing in the unseasonably warm weather that they had awoken to.

The author sets the stage in the first part of the book by introducing the many families and individuals that will soon be affected by the storm. I appreciate very much that he focuses on people for whom there was an abundance of detailed information (from diaries, letters, newspaper articles, etc.) on their daily lives and family histories, even going back a generation or two to their European origins. This gives incredible depth to the personal stories, making the litany of the many different ways in which they died heart-breakingly sad.

It’s not all death, though. There are instructive digressions on geology and science—such as nineteenth-century weather-forecasting technology and the unique meteorological features of this blizzard—and the author also describes the political fallout after the storm as blaming began.  Apparently, journalists throughout the country vigorously argued in the papers for months not just about whose fault it was that the storm wasn’t forecast properly, but also what the final death count was (one paper insisted that the actual toll of almost a thousand was being “covered up”) and whether or not the northern prairie was fit for human habitation.  Many journalists defended Dakota Territory, pointing out that even with its deadly blizzards it was safer than “the fetid cities of the East Coast or the malarial swamps of the South.” Others were accused of making things up in the press to scare away new settlers.  It’s all a fascinating slice of history; readers who can’t bear the descriptions of children freezing to death can skim those parts and still find a great deal here to enjoy.

EXCERPTS:
It’s hard to fathom how children who walked to and from school a half mile or more every day became exhausted to the point of collapse while walking a hundred yards that afternoon. Hard to fathom until you consider the state of their thin cotton clothing, their eyelashes webbed with ice and frozen shut, the ice plugs that formed inside their noses, the ice masks that hung on their faces. This was not a feathery sifting of gossamer powder. It was a frozen sandstorm. Cattle died standing up, died of suffocation before they froze solid….

We’ll never know how many spent that night out on the prairie. It had to be at least several thousand, most of them in the southern and eastern parts of Dakota Territory, in the eastern half of Nebraska, and in southwestern Minnesota. Northern Dakota was largely spared because the storm blew through so early that people remained home and kept their children in. …The catalog of their suffering is terrible. They froze alone or with their parents or perished in frantic, hopeless pursuit of loved ones. They died with the frozen bloody skin torn from their faces, where they had clawed off the mask of ice again and again. Some died within hours of getting lost; some lived through the night and died before first light. They were found standing waist deep in drifts with their hands frozen to barbed-wire fences, clutching at straw piles, buried under overturned wagons, on their backs, facedown on the snow with their arms outstretched as if trying to crawl. Mothers died sitting up with their children around them in fireless houses when the hay or coal or bits of furniture were exhausted and they were too weak or too frightened to go for more….

[Three days after the storm, a farmer walking in his field discovers five frozen bodies. Three of them are Johann Kaufmann’s missing sons.] Night was falling by the time Johann returned home. Anna stood at the door with her three little blond children and stared as her husband carried the three bodies inside. Johann set the rock-hard bodies on the floor next to the stove. Anna looked at her dead sons and began to laugh. She couldn’t help herself. Her husband and her two little boys turned to her in disbelief but Anna didn’t stop. It would be days before they could get the bodies into coffins. Anna laughed. Emma was still a baby, too young to know what was happening, but Julius and Jonathan were old enough to understand that those frozen blocks next to the stove were the dead bodies of their brothers. For the rest of their lives, the two brothers would never forget the peals of their mother’s agonized laughter.

This review first appeared in November 2004
By Donna Long