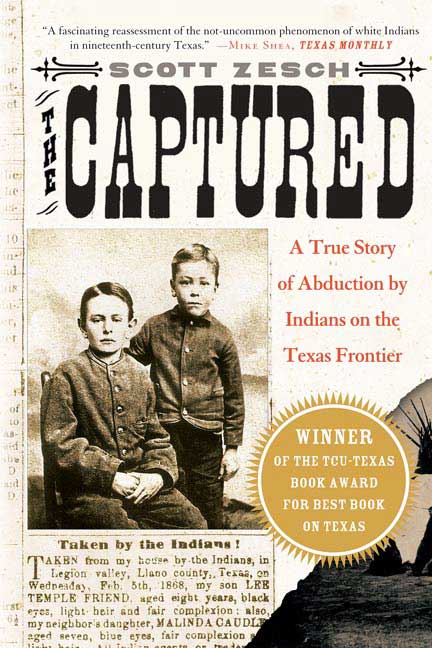 The Captured: A True Story of Abduction by Indians on the Texas Frontier, by Scott Zesch. St. Martin’s Press (2004), 382 pages.

This is a book about child abductions, perpetrated by the Native Americans against the settlers, in a very specific place and time: Texas hill country in the 1860s-1870s. With child abductions so prevalent in the news this month (Elizabeth Smart facing her abductor in court for the first time; Jaycee Dugard sitting for her first interview and photos), this is the ideal moment to read The Captured.  This book actually sat on my waiting-to-be-read shelf for over two years, for no particular reason. I’m glad I remembered it. Now is the time to read it, because learning about these nineteenth-century children in light of the Smart and Dugard cases is incredibly thought-provoking.

The title is misleading, as it gives the impression that the book is about just one abduction. True Stories would have been better than A True Story, because nine cases are explored in depth, including two pairs of siblings. The shortest of these abductions was five months, the longest twelve years—unless you count the guy who refused to go back to his family and spent the rest of his life with the Indians, but we’ll get to that in a moment.

I had previously assumed that the taking of children during Indian raids was either a retaliation against the whites for crimes the whites had committed, and/or a strategy meant to frighten and drive off the settlers. Actually, the Native Americans in this region—Comanches,  Kiowas, Kickapoos, Apaches, and Quahadas—all routinely abducted children simply as a customary aspect of their culture. Before Europeans arrived they abducted from enemy tribes; afterwards they abducted immigrants, whether Mexican, German, or American, simply because they were there. The biggest surprise in the book is this: the stolen children were generally not harmed but were adopted into the tribe and raised by a loving adoptive “mother,” usually one who had been unable to bear her own children and who protected them and taught them. Stealing children was simply a way to increase the size of the tribe, because birth rates were fairly low and young warriors were greatly needed.

Because the abductees were treated well and given the freedom to ride through the country all day on their horses, hunting and playing, the author makes the case that these children preferred their new life with the Indians.  All nine were children of German immigrants and came from a culture in which extremely hard work around the farm was expected of them from sunrise until sunset, with no opportunity for school or play. Of course they would rather ride free all day in a completely unstructured manner and socialize with friends, the author proposes. He also explains that the children must have been grateful for the love and instruction the Natives provided—while the German families had no spare time to spend with their children, the Indians “spent much time training them, making them feel significant in tribal society…. Banc Babb’s Comanche mother taught her to swim, took her to religious ceremonies, and instructed her in tribal lore. Perhaps the captives, in turn, felt a need to prove that they were worthy of their Indian parents’ investment in them.” This is a compelling point of view, but doesn’t take into account Stockholm syndrome as a result of the horror of seeing one’s family murdered during the raid, and being thrust into a radically different culture that doesn’t even speak the same language. Each of the children came to identify very strongly with their Native families, defending them even in their old age, fifty years after being reunited with their relatives. And very few of the children wanted to go back home after being found. Several refused outright but were forced home; one boy of eighteen subsequently ran back to the Comanches and stayed with them until his death 64 years later.  To what extent did Stockholm syndrome play into all of this? The book’s biggest flaw is that the author doesn’t explore this in any depth—in fact he more or less poo-poos the whole idea: exactly two paragraphs in the 382-page book are devoted to the topic, with the conclusion that the syndrome simply “doesn’t explain” the children’s behavior.

The Captured is another must-read for American-history lovers, or anybody interested in Native American-European relations, with the caveat that the lack of research into Stockholm syndrome is rather strange and impedes a fuller understanding of these children’s lives.

EXCERPT:
The temperature had dropped sharply after sundown, but eight-year-old Minnie Caudle was too much in shock to notice the numbness in her hands and face. The Indians who had taken her moved fast and spoke little. Minnie was tied behind one of the women in the raiding party, a fat Comanche who was to become her adoptive mother. The woman drew a blanket around her so that she didn’t suffer terribly from exposure. The Indians and their seven captives hadn’t gone far when Samantha Johnson’s infant daughter, Fielty, started to cry. Everyone tensed. The noise would give away their location if a search party was following them. The man who was carrying Fielty choked her, trying to make her stop. Samantha was riding behind him on the same horse. In a panic, she tried to take her baby away from him. He got so angry at both of them that he grabbed the infant by the ankles and dashed out her brains against a tree. Minnie Caudle saw it happen. The murdered infant was her niece, her half sister’s child.

The two older children, Minnie and Temple, realized that they mustn’t cry, not even when they saw worse sights the second day. Shortly after they left camp the next morning, the Indians decided that they didn’t want to risk traveling with a wailing infant. One of them grabbed Rebecca Johnson’s three-year-old daughter, Nancy Elizabeth, and slit her throat. They held up her body by the feet as blood flowed out, letting her head dangle right in front of Rebecca. The child’s mother screamed and fainted. The Indians laughed at the spectacle. Then they took off again. Around noon they stopped. The raiders held a conference. The five remaining captives couldn’t understand what they were saying, but they knew the Indians were debating something. Finally, the men grabbed the two Johnson women. Before Minnie could see any more, her Comanche mother threw a blanket over her head.