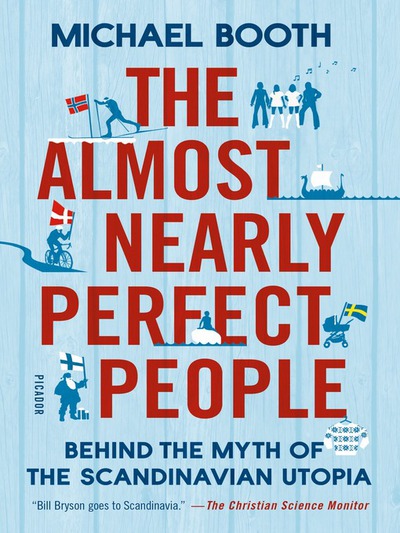 My knowledge of the people of Scandinavia, though somewhat less abysmal, has been limited to what I have been able to gather from their authors. I had deduced that the people are comprised of two camps: carefree, nature-loving, innocents (Astrid Lindgren and Tove Jansson) and grim, depressed, stoic types who shun conversation (Haldor Laxness and Knut Hamsun). Camp grim is also well-represented by Hans Christian Anderson’s children; tragic little figures in hand-knit mittens and caps; ever-stoic and most certainly not crying in the face of near constant tragedy, betrayal, deception and death.

I also know (as do we all) that Icelanders are incomprehensible (Bjork), the Swedes are repressing serious aggression issues (Stieg Larsson and the Nordic crime genre), and Denmark is annoying (Legos and the “Everything is Awesome!!!” song)

That being the sum-total of my Scandinavian education, I was delighted to run across The Almost Nearly Perfect People, written by Michael Booth, a Brit living in Copenhagen and married to a Dane. This insider/outsider status, plus his dry wit make him the perfect tour guide.

Booth’s subtitle suggests that his purpose in writing this book is to debunk our current Everything-is-perfect-in-Scandinavia fantasy—and he certainly does address this, particularly in the chapters on socialism, taxes, immigration and economics. These portions of the book are interesting and certainly useful in understanding how the countries have come to be as they are, but they are not what make it so much fun to read. It is, rather, Booth’s observations on cultural differences that make his story so entertaining.

Scandinavia is officially comprised of Norway, Sweden, Finland, and Denmark. Booth has added Iceland to the group even though it is not technically Scandinavian, because the inhabitants consist almost entirely of descendants of outlaws from Norway, plus a handful of “Scottish and Irish sex slaves they picked up on their journey west.” Plus, Icelanders still speak Old Norse “a purer version of the Scandinavian languages of the past.” They are, Booth says, “more Scandinavian than Scandinavia.”

Some of the Scandinavian countries have very particular way of socializing (or not socializing as the case may be) and one is well advised to think carefully about one’s own preferences in this regard before impulsively deciding to move there.

If you are a social, humanity-loving type, Denmark is the place for you. Their favorite pastimes include drinking, eating, and communal song-singing. These things must always be done in groups as it is important to be in the company of others. The Danes are zealous joiners of clubs and societies of every kind. The downside of all this heart-warming camaraderie is a thing called “jante,” which means, basically, that one must never try to distinguish oneself from others. Ambition, striving, or goal-oriented activities of any kind will be frowned upon.  One must always be laid-back, easy-going, and consensus-driven: A sort of fascism of good cheer and neighborliness, if you will.

For those of you misanthropic depressed loners who would prefer to have your fingernails ripped out with a pair of rusty pliers than to sit through a Danish get-together—there is a country for you. Finland! The Finns are the mirthless, shoulder-against-the-wheel, silently-suffering Scandinavians. The work of their most acclaimed filmmaker, Aki Kaurismaki epitomizes the Finnish character:

A typical Kaurismaki film presents a cast of, essentially, gargoyles, who toil in wretched jobs (coal mining, dishwashing), exchange grunts, and drink heroically. Eventually some of them shoot themselves to death. The end.

This would appear to mirror their auteur’s outlook on life: “I more or less know I will kill myself, but not yet,” Kaurismaki told a recent interviewer.

The Finns’ hard-drinking, angry, suicidal disposition may seem a strange aberration when considered alongside the rest of Scandinavia’s shiny happy people, but it makes perfect sense when you consider their proximity to Russia and the way this has impacted Finland.

A bit of history to clarify: Finland, like most of Scandinavia, was part of the kingdom of Sweden for hundreds of years, but then was ceded to Russia in 1809. A civil war soon followed (which lasted only four months but killed 37,000 people). Finland had barely recovered from this trauma when Stalin decided, in 1939, that he wanted some of Finland back.

The Finns faced certain defeat with only around 200,000 men and virtually no planes or tanks to defend the country against the 1.2 million-strong Red Army. Following a truly harrowing, permafrosted campaign that lasted three months and saw prolonged periods in which the temperature fell below —104F, 26,000 Finnish lives were lost compared with 127,000 Russians.

This brief Winter War was followed by three more years of Russian attempts to invade Finland. During this time, not only did Sweden not come to the defense of its neighbor, it “prevented the League of Nations and the Alllies coming to Finland’s aid.” In the meantime “neutral” Sweden’s economy flourished while supplying both the Germans and the British with war materials.

And in more recent times:

For much of the Cold War, Russian tanks were lined up along the Finnish border awaiting the order to roll. And who would come to the Finns’ aid if the Russians did invade? The neutral Swedes in their hairnets? The demilitarized Germans?

In other words, since 1809 it has been little Finland, alone, who has carried the burden of protecting itself, Sweden, and Norway from Russian invasion and from the same kind of disaster that befell the Baltic states after World War II.

Norwegians are the dirndl-wearing, nature-loving Scandinavians who cherish their mountain cabins, their skiing and their fjords. The Norwegians, Booth says, “are defined by their landscape the way the French are defined by their culture.” They are also among the wealthiest countries, not just of Scandinavian, but of the world, with the second highest GDP of any nation. All this wealth, however, comes courtesy of their newly discovered oil fields, making for a somewhat confusing identity-clash. We’re the Dubai of the North! Norwegians are Green!

Sweden is the largest, most populated, most successful of the Scandinavian countries, but is also, apparently, punctual, law-abiding and industrious to a fault. None of the other Scandinavian countries can bear them. “They are so stiff and boring,” is the common Danish description of the Swedes, “and they don’t know how to handle their beer.” The Finns mock the Swedish men for “egging the Finns on to give the Russians a bloody nose as they fluttered their lace hankies on the other side of the Gulf of Bothnia.” And Norwegians considers May 17 (Norwegian Constitution Day) “a kind of ‘fuck you’ to the Swedes.”

According to Aki Daun, a Nordic ethnologist, the Swedes are “…a race of wallflowers racked with insecurities; they would rather take the stairs than share a lift, he writes. Their more scintillating habits including visiting the countryside, eating crisp bread, speaking in a low voice, and avoiding controversial subjects in conversation.”

It is not often that a book inspires me to spend hours online researching history, maps, and the proper pronunciation of foreign words. The fact that The Almost Nearly Perfect People did exactly that, in addition to creating in me an obsession for all things Scandinavian is everything a book of this kind can hope for.

*Note to publisher: Add some maps to the paperback edition. The one teeny tiny map you included to cover all of these countries is ridiculous.