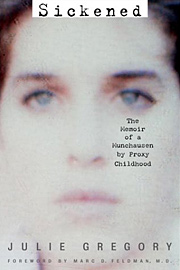 Sickened: The Memoir of a Munchausen by Proxy Childhood, by Julie Gregory.  Bantam Books (2003), 246 pages.

This is the most one-of-a-kind memoir I’ve ever read. It is incomparable in its horror—even within the subcategory of memoirs featuring insane and abusive parents, which is saying a lot—because no other book has been published that describes a childhood defined by Munchausen by proxy syndrome from the point of view of the victimized child. This alone would make it worth reading, but there’s more: it is well written, it perfectly captures the child’s voice, it shocked me in so many unexpected ways that I kept putting the book down to mull over the despair and depravity of it all, and, unbelievably, there are many humorous elements to the writing (mostly in the first third, when, from the point of view of a very young child, the author tries to make sense of her perplexing world).

On top of everything else, there is more than one Munchausen by proxy relationship at work here. Gregory’s maternal grandmother is also involved; having already Munchausen-ed her daughter, she is now at work on her granddaughter as well. The grandmother had a particular penchant for the attention she would receive after a car wreck. Note the way Gregory first shares this with us (first excerpt, below). The way she casually tosses the news into a story that we think at first is about fishing is a perfect example of the way she captures the essence of how normal this all was to her.

Near the end of the book, when Gregory is twenty-four and taking a community-college abnormal-psych course, she hears the professor discussing Munchausen by proxy and in that moment abruptly realizes the truth of her situation.  Up until this point she had believed there was something wrong with her; now she becomes devoted to tracking down every last scrap of medical evidence from her past. She begins to untangle how and why this happened—why did so many doctors, surgeons, and specialists of every sort perform invasive tests and treatments (including a heart catheter) for no reason?

EXCERPT:
We’d get on down to the lake and lounge on the smooth rocks and catch fish with prickly parts wherever I’d touch…. We always gave those little fish their freedom and that was my favorite part: handing them over to Grandma to peel the hook out of their mouths and then, squatting down at water’s edge, watching them swim away. As for the ones that floated on top, I’d hope and pray to Jesus that they were as okay as Grandma said they were right after she crunched the hook out of the side of their face. Then the sun would sink a little, feathering lightly into the surface of the water, and Grandma and I would climb back in the car and go off and get in a car wreck. It was never anything too serious. A head-on here, a rear-ending there, always at slow speed and usually with old people like her.

Sometimes she’d say, “Here we go, Jewelly,” which meant to scoot over and clutch the door handle, squinching your eyes shut. Her targets were usually red things: signs and brake lights. When she’d smash into another driver, she’d hop out of the car and disappear, melting into the small pool of people who were starting to gather. Usually some stranger would scoop me up, fussing and full of questions, carry me into a 7-Eleven or a bait-and-tackle shop or their own house, and eventually my mother would come to pick me up.

EXCERPT:
Mom thinks I’m allergic to the new carpeting in our house, but Dr. Phillips puts me on an elimination diet to see if it’s something I’m eating. He tells her to take chocolate, meat, eggs, dairy, and bread out of every meal I eat.

After our appointment, Mom and I amble down the aisles of the supermarket, my fingers looped through the metal slots of the cart as I watch what she pulls off the shelves: Oreo cookies, pork chops, Grade A eggs, two-percent milk, and a couple loaves of Wonder. Bay’s Grocery doesn’t seem to have any of the foods Dr. Phillips wants me to eat.

Today, I’m back at Township, getting seen for my headaches. Mom and I sit in the examining room, waiting for the doctor.

“How do you act when you’re sick, Julie? Show me.” I slouch on the edge of the table, limbs dangling. I hang my tongue out and my bottom lip falls away from my teeth like a National Geographic pygmy with a lip plate in.

“That’s right. Now what do you think the doctor is going to say if he comes in here and you’re sitting up and all smiling? Do you think he’s going to believe me that you’re sick? You got to show him how sick you are outside the doctor’s office. We got to get to the bottom of this thing so Mommy can get some rest.” She licks her thumb and smudges dried egg from the side of my mouth. Her spit smells like rot.
“Okay, honey?”
“Okay, Mommy.”

This review first appeared in January 2004
By Donna Long