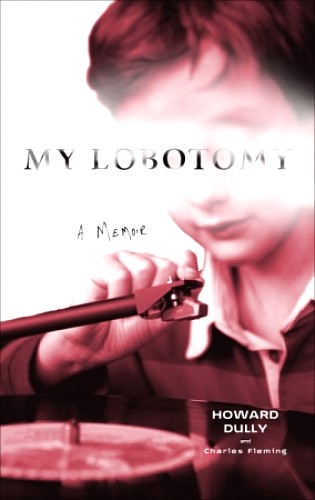 It’s hard to beat a title like this! Happily, My Lobotomy does not disappoint.

In 1960, at the age of twelve, the author was given a transorbital lobotomy, despite the fact that he had no mental illness or serious behavioral problems. This is a classic evil stepmother story: she simply hated him—really hated him—and when her physical and emotional abuse wasn’t enough, she sought more drastic measures.

The book explores, in full and graphic detail, the life of Dr. Walter Freeman, the charismatic and controversial doctor who made the lobotomy famous (he’s not the one who came up with the idea for lobotomies, but he “perfected” it by using an ice pick and entering through the eye orbit rather than the top of the skull) and who performed it on the author. Between 1946 and 1967 he performed thousands of lobotomies, and “trained” hundreds of others by conducting cross-country driving tours in which he visited mental institutions and demonstrated quick lobotomies for other people (many of whom were not even in the medical field, such as technicians, aides, or therapists) to begin doing on their own. He didn’t believe in “germ nonsense,” priding himself on his willingness to give a lobotomy anywhere, anytime. Once, when a patient changed his mind about having the surgery and locked himself in his hotel bathroom, Dr. Freeman drove to the hotel, talked the patient into opening the door, and then, “using a portable electroshock machine he had designed and built for himself, he administered a few volts to the patient to calm him down…. It then occurred to him that since the patient was already unconscious, and he had a set of leucotomes in his pocket, he might as well do the transorbital lobotomy then and there, which he did.”

Typically, however, the ten-minute procedure was performed in his office: “He stretched the patients out on a table, knocked them out using electroshock, punctured the skull using his Uline ice pick, and swung the ice pick back and forth across their frontal lobes. He waited for the bleeding to stop, then sent the patient home, sometimes in a taxi cab.”

Dr. Freeman obsessively documented every lobotomy with “before,” “during,” and “after” photos. Until he figured out that he should ask an aide to hold the picks while he took his “during” photo, numerous people died: “Freeman stopped mid-surgery to set up the camera and document the procedure. For some reason the ice pick began to slide down into the patient’s brain. He died without ever regaining consciousness.”

As I mentioned, this book is graphic. It is also a heart-wrenching autobiography of a boy who lost his devoted mother at five, was raised by a demonic stepmother, and was sent to a state mental institution not once but twice, in between stints at foster homes, juvenile hall, and a school for the learning disabled. The last quarter of the book is especially touching. The author, now sixty, flies to Washington, D.C., where all of Freeman’s prodigious files were donated to a university after his death. Only former patients are allowed access to the files—and Dully is the first person in history to request them. Here he sees his own photos for the first time—Freeman’s traditional before, during, and after shots (two of which are reproduced in the book) depicting the author at twelve:

“In the during picture, I’m lying flat on my back. The photograph was taken of my profile, from my left side. My hair is brushed back off my forehead. My mouth is open. A man’s left hand, with a hairy arm and a shiny wristwatch, is holding one end of a leucotome. The other end is sunk into my left eye socket. It looks like about three inches of the leucotome is actually in my skull.”

The author’s intent in reading his files is to find out why this was done to him. For over forty years, he just wanted to know why. Freeman kept ample notes on every patient, including Dully, and as we get closer to the why, the book is impossible to put down. Imagining the author in the archives, reading Freeman’s notes on himself and his family, is incredibly poignant, as is the author’s attempts to get an answer from his dad, the only living person who can answer his questions.

I should note that for the first twenty-five pages or so, I was a bit annoyed by the short, choppy sentences: “It was almost dark. We were alone in the car. We were in San Jose, riding down Seventh Street in my dad’s Plymouth station wagon. He told me my mother had gone away. She wasn’t coming back. I wasn’t ever going to see her again.” I was not quite annoyed enough to want to stop reading, though, and by the time I was a third of the way through the book, I didn’t mind anymore. I realized that given the subject matter, and the fact that the author had had a lobotomy, beautiful, finely crafted sentences really wouldn’t suit this book. The writing style, choppiness and all, is successful because the content provides a compelling reason for it.

Look for a copy of this book that includes “Afterword to the Paperback Edition.” After the hardcover was released, the author was invited by a team of researchers at Stanford to have a complete MRI scan of his brain, using up-to-the-minute software, to show precisely what damage was done. No such scans exist for any other lobotomy patient. Even more importantly, there is no other living patient who had no mental problems prior to the lobotomy. The results are fascinating.