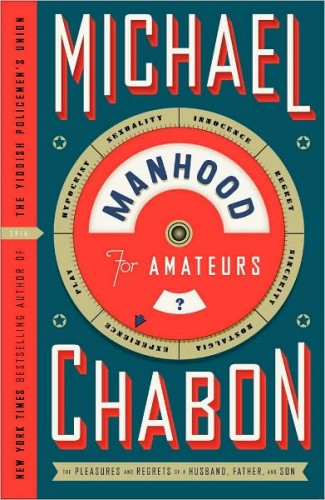 Manhood for Amateurs: The Pleasures and Regrets of a Husband, Father, and Son,  by Michael Chabon. HarperCollins (2009), 306 pages.

Chabon’s writing in this collection of essays appears, as usual, to be effortless, as if his words were typed out directly from his mind and onto paper without any editing or revising necessary.  He has a natural gift and an unmistakable, charming voice that is apparent in everything he writes.

Unfortunately, however, many of the pieces in this collection are too light to do justice to his talent. They read like the articles for men’s magazines that many of them were (particularly those related to baseball, comic books, and the travails of being a father) and have a decidedly beach-reading feel to them rather than a literary one. This is likely to be disappointing to those hoping for a volume that compares with Chabon’s fiction.

On the other hand, fans intrigued by the real lives of authors they love will find this collection to be a treasure-trove of inside information. Chabon writes about his four children (including one who shares his OCD), his wife Ayelet and her near suicide, his sex life, his divorce, and his ex-father-in-law.

The entries that work best are those in which Chabon moves beyond the superficial to write with real poignancy and insight about issues such as the loss of childhood freedom and adventure.

EXCERPT:
We schedule their encounters for them, driving them to and from one another’s houses so they never get a chance to discover the unexplored lands between. If they are lucky, we send them out to play in the backyard where they can be safely fenced in and even, in extreme cases, monitored with security cameras. When my family and I moved onto our street in Berkeley, the family next door included a nine-year-old girl; in the house two doors down the other way, there was a nine-year-old boy, her exact contemporary and, like her, a lifelong resident of the street. They had never met.

The sandlots and creek beds, the alleys and woodlands have been abandoned in favor of a system of reservations—Chuck E. Cheese, the Jungle, the Discovery Zone: jolly internment centers mapped and planned by adults with no blank spots aside from doors marked STAFF ONLY. When children roller-skate or ride their bikes, they go forth armored as for battle, and their parents typically stand nearby.

I grew up with a freedom, a liberty that now seems breathtaking and almost impossible. Recently, my younger daughter, after the usual struggle and exhilaration, learned to ride her bicycle. Her joy at her achievement was rapidly followed by a creeping sense of puzzlement and disappointment as it became clear to both of us that there was nowhere for her to ride it—nowhere that I was willing to let her go. Should I send my children out to play? There is a small grocery store around the corner, not over two hundred yards from out front door. Can I let her ride there alone to experience the singular pleasure of buying herself an ice cream on a hot summer day and eating it on the sidewalk, alone with her thoughts? Soon after she learned to ride, we went out together after dinner, she on her bike, with me following along at a safe distance behind. What struck me at once on that lovely summer evening, as we wandered the streets of our lovely residential neighborhood at that after-dinner hour that had once represented the peak moment, the magic hour of my own childhood, was that we didn’t encounter a single other child.