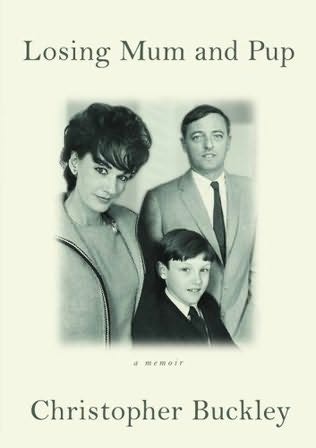 Buckley’s memoir about his famous father and socialite mother tends to engender either appreciation (for a witty, interesting story about losing one’s parents) or scathing condemnation (for a cruel and heartless portrayal of a much-loved couple).  Which side the reader falls down upon depends for the most part on whether or not one was an admirer of William F. Buckley’s show Firing Line or his magazine National Review.

Though I was a fan of neither (being too young to have any kind of political opinion at that time), I did grow up hearing my own parents say “William F. Buckley” with such awe and reverence that the name has always been linked in my mind with both a God-like intellectual infallibility and the holder of the keys to the one true faith—the American Conservative Movement.

Since I, as an adult, am as far from conservative as is possible, however, my political sensibilities were in no danger of being offended by Christopher Buckley’s book.  I was free to enjoy it for what I believe it was meant to be—a memoir of an only child dealing with the suffering and death of his parents. Many reviewers have criticized Christopher for revealing to the public his father’s excessive drinking, Ritalin use, and general egomaniacal behavior, but I appreciated seeing that there was, in fact, a regular human being behind the political ideologue.

Losing Mum and Pup is unlikely to appeal to anyone looking for insight or information into William F. Buckley’s political thinking, but for those interested in parental loss, or memoirs in general, Christopher Buckley’s book is sure to be appreciated.

EXCERPT:
He had at this point in his flying career exactly one and a half hours of cockpit time.  He had never soloed. So he and his friend flew to Boston, the friend doing the flying, which left Pup at Boston Airport all alone and now having to get the plane back to New Haven.  I was a licensed pilot in my youth, and I simply shudder to relate the rest of this story.

Pup revs up the Ercoupe for the return flight and takes off, at which point he notices that, gee, it’s getting kind of dark. He’s neglected to factor in last night’s switch from daylight savings to eastern standard time.   This being way before GPS, he navigates back toward New Haven in the gloaming by descending to one hundred feet and following the train tracks.  This somewhat basic mode of navigation begins to fail him when it turns pitch black.  The situation now seriously deteriorating, he makes out—thank God—the beacon of the New London airport.  He manages to set the plane down there.  He then hitchhikes back to New Haven and goes straight to the Fence Club bar to steady his nerves and share his exploits.