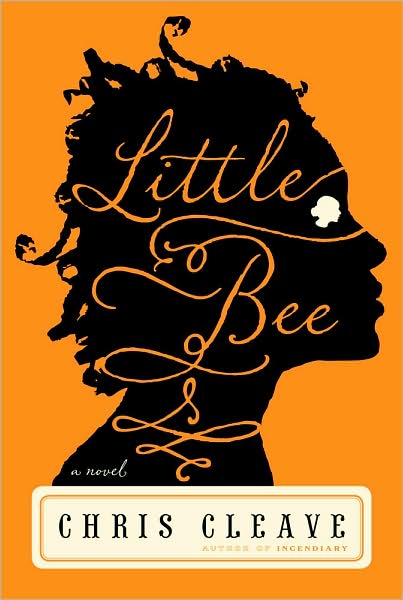 Little Bee is a fourteen-year-old girl from Nigeria who is living in England in a detention center for illegal immigrants. She shares the narration of this novel with a woman named Sarah who she met several years ago when Sarah was visiting Africa with her husband.

The plot builds to a devastating conclusion that has been hinted at from the beginning but is not revealed entirely until halfway through the book.  Up to this point I loved Little Bee. Bee, the character, has one of the most original, utterly believable, haunting voices I have come across in a work of fiction in a long time. The writing is beautiful: “She was whispering into it in some language that sounded like butterflies drowning in honey.” And the horrible secret the characters share propels the story along with an intensity that makes the book impossible to put down.

But then, as I began the second half, I realized something was terribly, dreadfully wrong with Little Bee. In the chapters narrated by Bee, I was re-reading sentences simply to marvel at their beauty while the chapters narrated by Sarah were becoming more and more irritating.  I began skimming (skimming!) whole paragraphs whenever Sarah (or any of her friends) started talking. The dialogue became so snappy and repartee-ish I could almost see the notes on the screenplay adaptation—Sarah and Lawrence now engage in clever banter.

“You really don’t fit in here, do you?”
“Listen, I very much doubt I’ll still be working here tomorrow if I can’t think of something suitably noncommittal to write to the old boss in the next twenty minutes.”
“So write something.”
“But seriously, I can’t think of anything.”
I sighed. “Shame. You seemed too nice to be such a loser.”
Lawrence grinned. “Well,” he said. “You seemed quite beautiful enough to be so mistaken.”
I realized I was smiling back at him. “A little blond of me, you think?”
“Hmm. I think your roots are showing.”

It seemed to me that Cleave had made a 180-degree turn from the literary novel he started with to head down the road known as Schlocky-Melodramatic-Movie-Script. In thinking about this further, however, I realized that all of Sarah’s chapters had this problem from the beginning, but I was so engaged by Bee’s character in the first half, I had not really noticed until Sarah’s narration began taking over the story.

Not only is the dialogue a disaster but the plot, too, completely falls apart. Sarah decides it would be a good idea to take her four-year-old son with her to the unstable foreign country where her life was ruined?  She knows she is being followed by armed men who want to kill her and Little Bee, but thinks, hey, I think I’ll take my son to play on the very beach where the worst thing in my life happened?  This is just ridiculous.  No real mother anywhere on the planet would willingly do this.

As Sarah becomes more involved with Little Bee, the issues of globalization, class, immigration, etc. begin to take over the book in a Very-Important-Lesson kind of way.  These are all serious and relevant matters and I have no problem with them showing up in a work of fiction, but they have to serve the story.  You can’t just force them into the book, Mr. Cleave, because they matter to you and you have things to say about them.  That is what nonfiction is for.  And anyway, Bee herself was making all of these points without having to resort to sermonizing. Her mere presence and point of view speak far more eloquently than a clumsily administered morality tale ever could.

The character Little Bee is so good I have to give the book two stars for that alone.  But you might as well stop before the second half gets started.  It’s that bad. You just won’t care about anything that comes after.

EXCERPT:
The first girl in the queue, she was tall and she was pretty. Her thing was beauty, not talking. I wondered which of us had made the best choice to survive. This girl, she had plucked her eyebrows out and then she had drawn them back on again with a pencil. This is what she had done to save her life. She was wearing a purple dress, an A-line dress with pink stars and moons in the pattern. She had a nice pink scarf wrapped around her hair, and purple flip-flops on her feet. I was thinking she must have been locked up a very long time in our detention center. One has to go through a very great number of the charity boxes, you will understand, to put together an outfit that is truly an ensemble.