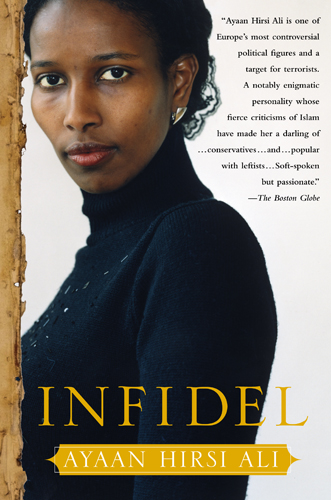 In order for me to love a memoir the author must cover the following basics: a great memory for not just the concrete details of life as a small child (if the memoirist has omitted the small-child portion of his or her life, I might still like it, but it’s unlikely I’m going to love it ) but also the thoughts and feelings that accompany those details, the ability to translate the events of one’s life into a compelling narrative that reads like a novel, a life itself that is eventful in some way that is unfamiliar to me, and of course, great writing. I rarely require much more than that to feel satisfied—in fact more than that (meandering off into lengthy digressions about history or politics for example) often annoys me as it tends to pull me out of the story I want to hear, that is, the story of the author’s life as it was lived in the moment.

Ali’s memoir, Infidel, is the very rare exception to this, however. She describes an unbelievably difficult life growing up in Somalia, Kenya, Saudi Arabia, and Ethiopia, which includes scenes of beatings, female genital mutilation, forced marriage, civil war, and starvation in refugee camps. And even though this is all very well written and from the point of view of the child she was, it is Ali’s thoughts about, yes, history and politics, that have most stayed with me.   In fact, Ali’s deeply critical understanding of how culture, history, and politics intersect, especially as they relate to Islam and the mistreatment of women, are so articulately reasoned she has actually changed some of my long-held beliefs about multiculturalism and the integration of immigrants into the dominate culture.

Ali makes the valid (if uncomfortable) point that liberal intellectuals avoid any critique of Islam because of a fear of being accused of racism, and that these liberals in fact have never read a word of the Koran, nor do they have any first-hand knowledge of how the Koran’s teachings translate into everyday life for Muslim women. Western liberals, according to Ali, want to believe that the Koran (like the Bible) is based on values of love and forgiveness and that any deviation from this into hatred and oppression is a result of misinterpretation by Muslim fundamentalists who have a greater desire for control than they do for Allah’s word. She maintains, however, that the subjugation of women is not a misunderstanding, or a cultural artifact, or a side-effect of some kind, but is in fact at the heart of Islam and what it means to be Muslim.  This memoir is so much more than an ordinary biography that it transcends the genre into some other category entirely and serves as an example for what is possible in the telling of a life. Ali is an entirely original, fearless, impassioned writer and thinker. Though some may disagree with her opinions, everyone should read this book.

EXCERPT:
I had mostly avoided other Somalis. Even when we were still living in the asylum center, I hadn’t had much fun with them. Everyone who hung out in Hasna’s caravan seemed to spend all their time complaining, especially the people who lived outside the asylum center, who had been in Holland for years and were simply visiting. These Somalis weren’t integrating into Dutch society. They weren’t working. They had nothing to do but hang about the asylum center and cadge meals. There were a few individuals who learned to cycle, who were ambitious and studied and worked—I wasn’t unique—but those people had no time to socialize. The others just chewed qat all night and sat around talking about how horrible Holland was.  We were all facing the same confusion. We had always been sure that we, as Muslims and Somalis, were superior to unbelievers, and here we were, not superior at all. In day-to-day life, we didn’t know how the cash machines worked or that you had to push a button to order the bus to stop…  Many people withdrew from such embarrassment into an enclave of shared Somaliness. Their reaction was to create a fantasy that they as Somalis knew better about everything than these inferior white people. “You don’t need to teach me how to use a thermometer, our Somali thermometers are much more advanced”—that kind of attitude. “His breath smells of a pig. He’s only a bus driver. How dare he think he can tell me how to behave.”  By the time I moved to Ede I had come to understand Holland better. It irritated me now when Somalis who had lived in Holland for a long time complained that they were offered only lowly jobs. They wanted honorable professions: airline pilot, lawyer. When I pointed out that they had no qualifications for such work, their attitude was that everything was Holland’s fault. The Europeans had colonized Somalia, which was why we all had no qualifications and were in this mess to begin with. I thought that was so clearly nonsense. We had torn ourselves apart, all on our own.

This review first appeared in June 2007
By Cindy Blackett