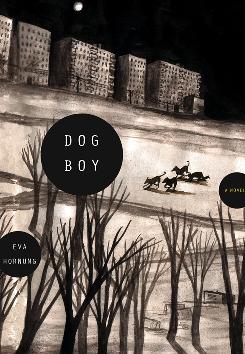 I don’t know if there any other novels about abandoned Russian children raised by feral dogs. (If you know of any, please let The Book Shark know!) The fact that Dog Boy may be the only such book in existence is reason alone to read it. Who hasn’t been mesmerized by the true stories of Russian orphans growing up believing themselves to be actual canines? (And why is it always Russia?) We’ve all watched the video of Oxana Malaya barking at the camera and panting in a grassy field, and periodically we read of others (true, many have been proven to be hoaxes, but the 2009 story of the five-year-old from Siberia has been corroborated by a number of news sources).

Dog Boy opens with a four-year-old’s Muscovite’s abandonment in the outskirts of the city, near the edge of the forest. The book has a rather slow pace for the first 130 pages as the child is adopted by a pack of strays and gradually learns how to survive. I have ambivalent feelings about these first 130 pages. On the one hand, the monotony of daily life spent eating, sleeping, and excreting became wearisome, and I worried that if it didn’t stop soon I would have to quit the book. On the other hand, though, I appreciated that Eva Horning was trying to show us—in real time, so to speak—the gradual evolution of the boy’s development through the ongoing minutia that made up his daily life and that finally turned him fully into a dog boy. In other words, perhaps there’s no other way to make his story understandable.

I also tired of the numerous detailed descriptions of eating carrion, which felt at times to be too much gratuitous grossness:

The wonderful rich smell of flesh and viscera rose in their faces. Romochka’s hands slapped and wriggled around the grinding jaws, feeling for the bits he wanted. He worked his hands deep into the cooling innards, feeling over and under the slippery sweetness for gizzard, heart, and liver. He felt the delicious taut globe of the heart and wrestled with the carcass to rip it out. It slipped through his urgent fingers three times, then the threads and sinews gave and it was his. He popped it into his mouth and couldn’t quite shut his jaws around it. He struggled to bite, chew, growl and at the same time feel for the smooth flaps of the liver. White Sister was pulling the intestines away under him. He found the tight juicy ball of the gizzard…. He felt the liver over until he found the gall bladder, bit it off gingerly and spat it to the floor…. He squeezed the grit and meal out onto the ground and settled down to chew through the rich flesh and its rubbery inner skin, spitting out small bits of grit and occasional feathers.

This is just a small excerpt from the pages-long meal that was enjoyed, and there are many other meals of different varieties that are treated with similar depth. How much of this is too much?

Fortunately, the book picks up pace dramatically after scientists enter the narrative. The scientists capture both Romochka and another child to study in the laboratory/hospital, and at this point there was no question of quitting the book. Without giving anything away, I’ll just say that these are not evil, one-dimensional scientists but well-meaning, sympathetic characters who bring a welcome complexity to the narrative. They do not force Romochka to stay against his will, but allow him to travel back and forth via the subway system—a skill that he learned from his dog pack. If you are unaware of Moscow’s subway-riding dogs, I hope you’ll take a moment right now to read this article.

To the incredibly talented cover artist Astrid Chesney: Your art is perfect for this book (in contrast to all the other ill-suited English-language versions).

To Australia: your happy white husky says “an Iditerod tale.”

To Canada: this reads “an adventure staring a happy pioneer boy in 1880.”

To England: are you aware this is not a children’s book?

Australia again: You’ve made this reminiscent of Japanese manga why?

Astrid Chesney probably actually read the book. Her art says: dark, visceral, wild; bleak Soviet housing. The dogs are shadowy figures, not exuberant pets about to go to the local dog park. And the boy isn’t easily seen at first, and then you realize he’s crawling (rather than tromping joyfully towards adventure).

He knew when the dogs were pleased. He could feel it and see it in the way they used their bodies. Their joyous wriggle and the smile of a sweeping tail were an immediately comprehensible body of happiness. Mamochka’s contented sighs in their bed filled him, too, with bliss. He knew when someone was annoyed, because they bit him. He learned teeth: the friendliness of a gesture that held teeth low and nonthreatening, and slowly all the gradations from bared-teeth threat, lip-veiled threat, and teeth set aside or used for play. He found himself quickly fitting in with teeth serious and teeth playful, reading easily the bodies around him with eyes, fingers, nose, and tongue.

Everything was ritual. He began to emulate the greeting, in which every absence was healed. He made his body joyous too, his head low, mouth small; he helped in delight and licked the mouth corners of the elder dogs as they entered. The greeting was also the moment of all confessions. Body joyous or body contrite, pure of spirit, or guilt-ridden, waiting for punishment. The dogs all confessed truthfully to each other at first meeting, crawling low, with face averted, then rolling over to take whatever punishment was theirs. Usually their abasement was enough. If the puppies had exceeded their boundaries, or eaten Golden Bitch’s bones, or ripped up the bed and spread it around, they told on themselves as soon as an adult entered.