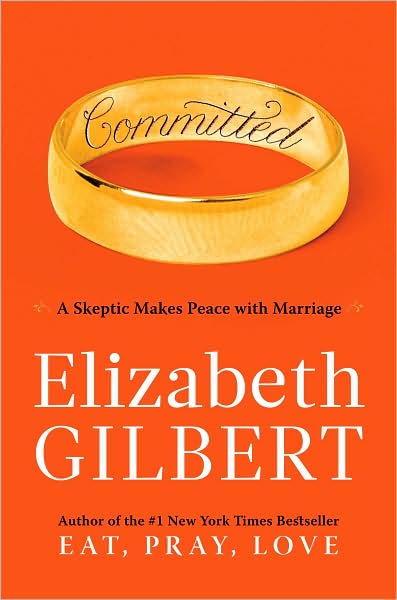 The movie adaptation of Gilbert’s Eat, Pray, Love will be opening in theaters this August. It is still May as I write this, yet the cover from the book is already showing up again everywhere I look. This is not a bad thing since the cover art is pleasing, clever, and original. It is also elegant, simple, and eye-catching and it conveys something of the tone and content of the book. In short, it is everything a cover could hope to be.

Unfortunately this is not the case with the cover for Gilbert’s follow-up, Committed. Everything that could possibly be wrong with this cover is wrong. The bright orange color with the wedding-ring image screams chick-lit, yet the book is, at least in part, a very serious, almost academic, look at marriage. This is another case of the publishers misdirecting the book-buying public by creating a cover that promises one kind of book, when what is to be found inside is another kind of book altogether. So now not only do I have a headache from the truly horrible shade of orange, but I am also insulted by the publisher’s belief that if I liked Eat, Pray, Love, I must be a reader of girlie fluff and therefore will need to be tricked into reading Gilbert’s next work.

It’s bad enough when actual chick-lit has this kind of cover art (readers of genre are book-lovers too—surely they don’t deserve to be punished with bad art) but when non-genre books are treated in this way, I become angry. As Gilbert should be. The cover is so bad it actually looks self-published. I hate this cover.

If you are still left in some doubt as to my feelings regarding the Committed cover and/or of bad cover art in general, please click here.

And now for the book itself. In the first two thirds Gilbert writes about marriage, in fairly deep complex ways, in a journalistic voice that is a welcome departure from the more simplistic, flip tone of much of Eat, Pray, Love. Her writing, as I said, is serious, almost scholarly, but with all the historical information she refers to, it was a major flaw not to include sources.  How are we to accord Gilbert’s work the weight she clearly means for it to have when she gives us no references or notes to source what she is saying?

The sections in which Gilbert writes about her mother’s and grandmother’s experiences of being married, on the other hand, are among the best in the book. Especially well done is the story in which her grandmother Maude cuts up the “cherished wine-colored coat with the real fur collar” she bought when she was a carefree single woman, in order to sew a Christmas outfit for her new baby girl. When Gilbert asks her Grandmother what the happiest time in her life was, she expects her to talk about the time when she was young and the proud owner of this wine-colored coat. Instead her grandmother says:

“The happiest time in my life were those first few years of marriage to your grandfather, when we were living together on the Olson family farm.”

Let me remind you: They had nothing. Maude was a virtual house slave to three grown men (gruff Swedish farmers, no less, who were usually irritated with each other) and she was forced to cram her babies and their sodden cloth diapers into one cold and badly lit room. She became progressively sicker and weaker with each pregnancy. The Depression raged outside their door. Her father-in-law refused to run plumbing into the house. And so on, and so on…

“Grandma,” I said, taking her arthritic hands in mine, “how could that have been the happiest time of your life?”

“It was,” she said. “I was happy because I had a family of my own. I had a husband. I had children. I had never dared to dream that I would be allowed to have any of those things in my life.”

Gilbert also excels at travel writing. Her dispatches from her stay in Vietnam and Laos reveal a part of her personality that is warm, curious, open, and much more interesting than she is when she is writing about herself. She has a friendly accessible voice and the self-congratulatory tone of Eat, Pray, Love is thankfully absent here.

The last third of the book, however, in which Gilbert focuses more exclusively on her relationship with Felipe and whether or not to marry him, begins to get tiresome. The self-absorption that marred Eat, Pray, Love returns and by the last hundred pages I had had it with the parenthetical asides and the italics. Nevertheless, there is much about Committed that is not to be missed. I can unreservedly recommend the first two hundred pages to all women who have ever been married or have thought about getting married.

EXCERPT:
(Felipe): “I used to get in trouble because I’d get too excited about the one or two perfect aquamarines in the parcel, and I wouldn’t pay as much attention to the junk they threw in there. After I got burned enough times, I finally got wise and learned this: You have to ignore the perfect gemstones. Don’t even look at them twice because they’re blinding. Just put them away and have a careful look at the really bad stones. Look at them for a long time, and then ask yourself honestly, ‘Can I work with these? Can I make something out of this?’ Otherwise, you’ve just spent a whole lot of money on one or two gorgeous aquamarines buried inside a big heap of worthless crap.

“It’s the same with relationships, I think. People always fall in love with the most perfect aspects of each other’s personalities. Who wouldn’t? Anybody can love the most wonderful parts of another person. But that’s not the clever trick. The really clever trick is this: Can you accept the flaws? Can you look at your partner’s faults honestly and say, ‘I can work around that. I can make something out of that.’? Because the good stuff is always going to be there, and it’s always going to be pretty and sparkly, but the crap underneath can ruin you.”

And that has always been, in my mind, the operative metaphor for what marriage does to my people. By “my people” I mean the women in my family, specifically the women on my mother’s side—my heritage and my inheritance. Because what my grandmother did with her fine coat) the loveliest thing she would ever own) is what all the women of that generation (and before) did for their families and their husbands and their children. They cut up the finest and proudest parts of themselves and gave it all away. They repatterned what was theirs and shaped it for others.

The story of the wine-colored coat with the real fur collar has always made me cry. And if I were to tell you that this story has not shaped forever my feelings about marriage, or that it has not forged within me a small, quiet sorrow about what the matrimonial institution can take away from good women, I would be lying to you.