A Wolf at the Table 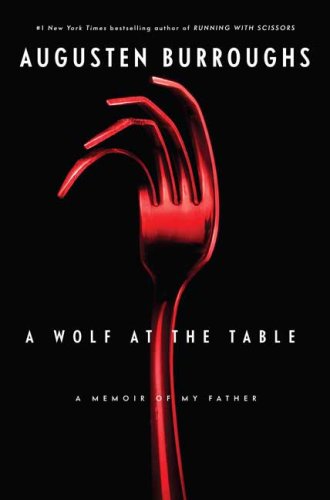 I was wrong about Augusten. He has proven beyond a doubt that he did have another award-winning book in him after all. I had declared him utterly finished after Magical Thinking, his collection of brief nonfiction essays in which he came across as an animal-hating, child-hating, bitter, angry, and ignorant person with an overly inflated ego. I actually threw that book in the trash rather than donate it to the library, because I didn’t think it deserved to be out in the world. This was shocking, because in 2005, two of the four titles shortlisted in the Gustine Award’s memoir category were Burroughs books—Dry and Running with Scissors (Dry won the Gustine that year). I concluded that he simply had nothing else of interest to say about his life and henceforth would resort to being unpleasant and mean to make his books more interesting.

But I was spectacularly wrong. It turns out there was an entire book’s worth of additional childhood trauma not even touched on in Running with Scissors, and his ability to write it all with a perfect child’s voice and brilliant pacing remained as strong as ever. I apologize, Mr. Burroughs; I won’t doubt you again. Actually, I understand you much better now that I’ve read A Wolf at the Table; I can see that you have valid and understandable reasons for turning off any emotions for animals and small children.

This book is different in tone from his other childhood memoir in that it completely lacks the unique humor present throughout that book. What becomes apparent after one gets into A Wolf at the Table, however, is that it is supposed to be different. It is a much, much darker period of his life, and lacks the absurdity of the events that transpire after he takes up residence with the psychologist. Everything in this book occurred long before he moved into that house, when his parents were still together and attempting (sort of) to be a normal family. The father in this book (who was not present at all in Running with Scissors) provides an undercurrent of serious evil and depravity throughout. He is more than cruel; he is sadistic and completely unpredictable. Did he once murder somebody and show the very young Augusten the gravesite? That certainly seems possible, or even likely, though Augusten cannot determine if it’s an actual memory or not. The image of the author in his Dry days, at the computer very drunk and compulsively searching the Internet for any clues about a missing person who could be traced to that time and place, has remained with me for more than a month after I finished the book. It’s a heart-racing element of the book, and the fact that it’s unresolved leaves an eerie and creepy aftertaste.

EXCERPT:
One day my mother told me, “I’ll be home late tonight.” It was dark. She’d been gone for hours. The phone rang. I picked up the wall phone in the kitchen.
“Hello?” It was my father.
“Son?” He was drunk. I could hear it in that one word.
“Yeah?” I said, walking with the phone attached to my ear out into the hallway. It was a long cord and stretched all the way to the front door.
“Son?”
“Yeah?”
“I have stolen a car. It’s a Mustang. And I am driving out there to the house right now and I’m going to kill you.” There was silence. And I heard him breathing.
“What did you say?” I whispered. The phone went dead.  I let go of the receiver. Because I’d stretched the cord to its limit standing near the front door, the phone flew back into the kitchen and smashed against framed photographs on the wall. I ran into the kitchen, did not see the shattered glass, and stepped all over the shards. My feet began to bleed immediately, the blood making the floor slippery. I lost my balance, slid, then brought my other foot down hard to catch myself, and sliced my toes….

[Augusten calls the police department and speaks with an officer.] …the phone rang again and I answered. It was an officer. His tone surprised me, the anger in his voice.
“We’re here at your father’s apartment and he’s not drunk. He’s not stolen any car. He seems perfectly fine. You know, this is a very serious thing you’ve done, this prank.”
“Put my father on the phone,” I snapped.  I waited.
“Hello, son?” my father said, sounding concerned. “What’s going on here, what have you done?” His voice was bone-dry sober.
“Why?” I asked him. “Just why?”
“Why what, son? Are you upset? Are you all right?”
“You just called me, drunk. You said you’d stolen a car, you said you’d stolen a Mustang and were coming out here to kill me. What’s going…why are you…this is…” I couldn’t get the words out, fury and terror and confusion overwhelmed me. I was standing in my own blood.
“Son, I did not just call you,” he insisted. And I would have believed him, fully, had I not just spoken to him moments before. For one brief, dark instant I questioned myself.

This review first appeared in May 2008
By Donna Long