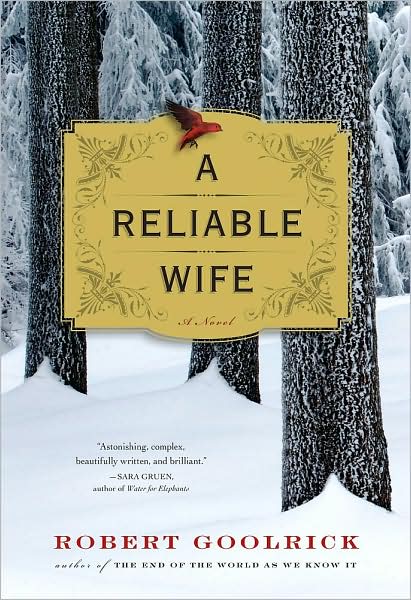 Goolrick’s novel is set in rural Wisconsin in the early 1900s—a time period and location I am most definitely interested in.  And the plot involves St. Louis opium dens, sex, madness, a mail-order bride who is not what she seems to be, and arsenic poisoning.  This combination (as well as the blurbs on the cover indicating A Reliable Wife is in fact literary fiction rather than romance) led me to pick up my copy feeling pretty confident that I would be up all night with it.

Unfortunately, however, A Reliable Wife turns out to be one of those “literary” novels that is in reality a male version of a bodice ripper. I hate when that happens. There are at least fifteen different, elaborately choreographed sex scenes (could be more like thirty, but I couldn’t stand to go back and count) that are such obvious male fantasies I had to keep flipping back to the author’s photo to see the head those fantasies were living in. Needless to say, sex that makes me wonder about the author’s life rather than the character’s, is sex that does nothing to further the story.

In addition, Goolrick has his characters chattering away page after page about the goings on inside of their minds, rather than showing us through their behavior who they are. This wouldn’t be so bad if the characters were interesting, but they are uniformly and entirely unrealistic.  Can anyone believe, for example, that a six-year-old boy stabbed in the hand with a needle by his mother (down to the bone, mind you) does not cry, does not scream, does not say anything?  Just notes to himself what a surprise it was?

Goolrick also has one of those authorial tics that makes me want to scream. Everything happens in a series of three, for example: “He had given up drinking.  He had led a sober life.  He had learned nothing,” and “She was neither sweet nor sentimental, neither simple nor honest.  She was both desperate and hopeful.” I don’t have any objection to this once or twice, but hundreds of times, every description, a series of three?  It reads as though either nobody bothered to edit the book, or the author and editor actually like the way this sounds—over and over and over again.

It often happens that a book I had great hopes for turns out to have some irredeemable problem.  Maybe the author’s voice is too generic, maybe the material got away from him and the plot wandered off. These things happen. And when they do I generally write the review (making sure to include whatever positive points I can find) and then forget about it.  I am finding it difficult to just forget about  A Reliable Wife, firstly because a truly fabulous plot has been wasted and secondly because much of that waste seems to be attributable to the author’s self-indulgence and self-conscious writing.  A book that is written in the service of the author’s ego can not simultaneously serve the story.  I suppose one could say the story belongs to the author and he can kill it if he wants to, but I tend to think of a great story as a gift that sort of just shows up—much like a stray puppy—and that an author lucky enough to find such a gift on his doorstep is obligated to do right by it.

Note:
One very good thing did come of this book however, and that is Goolrick’s reference to Wisconsin Death Trip, by Michael Lesy, which he says inspired his novel.  This is a collection of photographs from turn of the century Wisconsin, accompanied by newspaper articles from the small towns where the photographs were taken.  It is a compendium of every misery one could imagine—suicides, barn burnings, diptheria, smallpox, insanity, penury—that will change the way you think about rural life in turn-of-the-century America.