When Skateboards Will Be Free 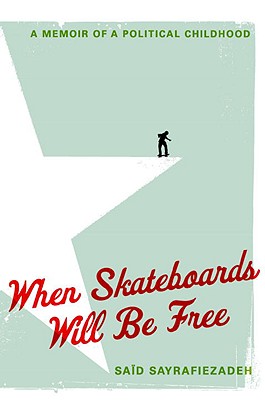 When Skateboards Will Be Free: A Memoir of a Political Childhood, by Said Sayrafiezadeh.  The Dial Press (2009), 287 pages.

There was a time when I couldn’t get enough of tragic childhood memoirs.  I would be appalled and heartbroken on behalf of the author and his sad, sad life—the alcoholic parents, the abandoning parents, the controlling parents—and his subsequent descent into addiction, anorexia, depression.  I have, of late, grown weary of this genre, however, and find myself bored by the seriousness with which every little detail of childhood is taken.

For this reason it is the memoirist who can laugh at his miserable life (and make me laugh with him) that I most appreciate.  Tobias Wolff is such a writer, as is Augusten Burroughs.  And now, Said Sayrafiezadeh joins them on my bookshelf with his sad and yet very funny memoir When Skateboards Will Be Free.

Sayrafiezadeh grew up in New York, the son of a Jewish American mother and Iranian father who were members of the Socialist Workers Party.  His father was always away on Party business (he remains to this day a leading member of the SWP) until he finally left their home altogether to live with a series of young women.  The author’s older brother and sister also moved out when he was still young, which left Sayrafiezadeh alone with his mother as she stood on street corners attempting to hand out copies of The Militant (The SWP official newspaper) to uninterested passers-by.

Some of the funniest parts of this memoir are scenes in which the author as a young boy tries to make sense of his mother’s rules for living a good Socialist life.  The title comes from the time he asked her to buy him a ten-dollar skateboard and she responded by saying that he could not have one, that he must wait for the Revolution “when skateboards will be free.” Sayrafiezadeh alternates these chapters in which the world is always on the verge of revolution, with his life as a young adult working as a label designer for various Martha Stewart products.  The irony of coming from a family whose sole purpose in life was to overthrow the capitalist, imperialist United States—thus freeing the oppressed workers—to employment with a company that makes its money by using sweatshop laborers is just one of the many incongruencies that Sayrafiezadeh writes about to great comedic effect.

EXCERPT:
When I was four years old there arose one morning an unresolvable crisis between my mother and me. I was in my bedroom playing with my toys when she entered and knelt beside me on the floor. “We will not be eating grapes or lettuce anymore,” she said plainly. I put my toys down and looked up into her face. It seemed odd and outlandish, this sudden rule.  The kind of rule that comes from nowhere, out of nowhere, made solely at the whim of the adult world.
“That’s a dumb rule,” I said.
“It’s not a dumb rule,” she said. And she went on to patiently explain that the rule was not her own but the rule of the Socialist Workers Party, which was itself following the rule of Cesar Chavez and the United Farm Workers, who had called for a national boycott of table grapes and iceberg lettuce.   All of this she described in the simplest of terms that allowed me to understand and accept the edict.
“You’re such a good boy,” she said, and she kissed me on the top of my head.
As the days passed, however, and the boycott carried on, I found that my desire for grapes began to eclipse my compassion for the workers.  Now it was my turn to interrupt my mother one morning.
“I’m ready to eat grapes,” I said.  I said it as plainly as she had.
She closed the book she was reading and looked down at me quizzically. “You can’t eat grapes,” she said. “You know that.”  And then she added, “And you  can’t eat iceberg lettuce.”
“I don’t want to eat iceberg lettuce,” I responded brightly, thinking that she would see this as a welcome compromise.
“Well, you can’t eat that either,” She said with measure.  Adult with child, adult instructing child. I detected, though, somewhere beneath her rational exterior, an undercurrent of satisfaction.
“I want to eat grapes,” I said.
“You can’t eat grapes,” she said.
And then I screamed: “I want to eat grapes! I want to eat grapes!” And I melted to the floor, rolling on my back. “I want to eat grapes! I want to eat grapes!”
“Well, you can’t eat grapes,” the light and airy voice said, “and you can’t eat iceberg lettuce.”