When All the World Was Young 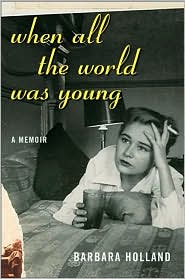 This intelligent, literary memoir is about childhood during much simpler times—the 1940s, though it could easily have taken place any time pre-80s, before urban sprawl and recent child-rearing fashions took hold. Indeed, I identified very strongly with the childhood Holland describes. Unlike so many other memoirs, this one is absolutely engrossing without ever once relying on harrowing or shocking events. Although serious family dysfunction and tragic events are present, they seem entirely incidental to the main thrust of the story; she is simply telling about her life in the forties, and my impression is that she wouldn’t change one minute of it.

This book also feels different from other memoirs in that, though it is a personal account of her life, it occasionally reads not so much as a memoir but as regular nonfiction (American Childhood in the Forties, perhaps), despite the fact that she is always at the front of the story. I think she has done an extraordinary job in putting her life in the perspective of the larger social framework.

Throughout, it is clear that the author has disdain for so much of today’s culture (the over-scheduled child, our separation from nature) yet she never explicitly says so. Never once does she proselytize on any of these topics; she lets her impeccable memory speak for itself. These memories in turn reminded me more vividly of my own childhood than any other memoir ever has. The way the yard gets torn up when you’ve been playing in the sprinklers: “The grass collapsed into muddy squish.” The complete peacefulness of being in a tree with a book, knowing that nobody will wonder where you are for hours. And why were the windows in cafeterias never opened? “The school’s compulsory lunch always smelled awful, perhaps because the basement cafeteria wasn’t ventilated and smells accumulated and layered in the air as the days and lunches went by…” Lawns: “Up close they were a miniature ecosystem, and children could lie on their stomachs and watch the very smallest of nameless bugs laboriously climbing to the top of a grass blade, swaying for a moment, and then climbing back down, having accomplished nothing discernable.”

EXCERPT:
One day somebody got the signals crossed and announced a genuine air raid headed our way. We were to go home in an orderly fashion, not to dawdle nor to panic and rush out into traffic, and head straight for our basements and sit with our knees over our ears as previously instructed. (Why we were sent to the cafeteria for a pretend air raid but sent home for a real one is another mystery.) I went home in an orderly fashion and found Mother reading on the couch.

“The Germans are coming,” I told her. “We have to go down to the basement. It’s an air raid, real one.” She looked up and struggled to focus on me. “Oh, I don’t think so,” she said.
“But it’s true! They closed the school and sent us home!”
“I expect it’s a mistake,” she said.
I stood there awkwardly in the middle of the room, the bearer of momentous news like a torch that had sputtered out in my hand. I could hear Viola singing to herself and the thump of her iron, and smell the steaming shirts. Mother turned a page. All was peace and order. Germany was clear across the ocean, and even the ocean now was far away. I went out to play.

This review first appeared in May 2006
By Donna Long