The Way the Crow Flies 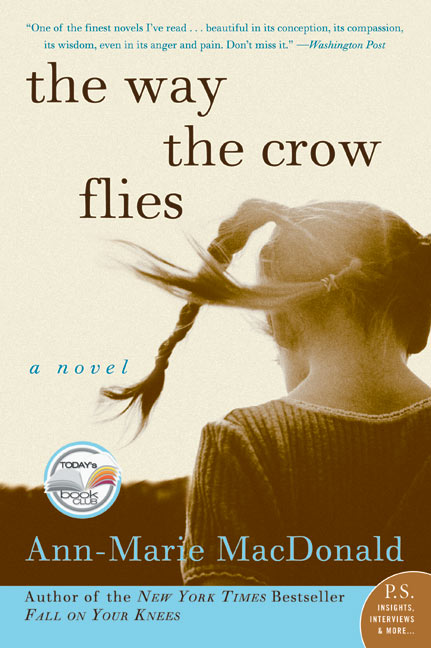 (This review first appeared in June 2005)

This book perfectly displays what I mean when I write that an author has flawlessly captured the child’s voice in his or her writing. The eight-year-old narrator in The Way the Crow Flies is true to life in every way and I was enthralled with her voice from page one:

In the back seat, Madeleine leans her head against the window frame, lulled by the vibrations. Her older brother is occupied with baseball cards, her parents are up front enjoying “the beautiful scenery.” This is an ideal time to begin her movie. She hums “Moon River” and imagines that the audience can just see her profile, hair blowing back in the wind. They see what she sees out the window, the countryside, off to see the world, and they wonder where it is she is off to and what life will bring, there’s such a lot of world to see. They wonder, who is this dark-haired girl with the pixie cut and the wistful expression? An orphan? An only child with a dead mother and a kind father? Being sent from her boarding school to spend the summer at the country house of mysterious relatives who live next to a mansion where lives a girl a little older than herself who rides horses and wears red dungarees?…

Mimi turns and looks back at Madeleine with the are-you-going-to-throw-up? expression. It makes her have to throw up. Her eyes water. She puts her face to the open window and drinks in the fresh air. Wills herself not to think of anything sickening. Like the time a girl threw up in kindergarten and it hit the floor with a splash, don’t think about that. Mike has retreated as far as possible to his side of the seat. Madeleine turns carefully and focuses on the back of dad’s head. That’s better.

I was delighted that this is such a lengthy book. For 600 pages—quite an impressive feat, really—I never once tired of this little girl and her thoughts on growing up in the 1960s, on an Air Force base in Canada, with the Cold War a constant presence in the background. The last 200 pages, however, when Madeleine is an adult, disappointed me. On the one hand, we needed to move forward in time for very important reasons having to do with a murder and family secrets kept hidden for twenty years. There are heart-racing elements to the plot that I could see were about to become illuminated, and this excited me greatly. On the other hand, adult Madeleine is just not as relatable as her childhood self. Her dialogue no longer sounds believable to me, and I didn’t find the writing satisfying anymore either, perhaps because it’s a bit chick-lit-ish:

“I’m seeing someone,” she says.
Nina listens.
“I’m um…happy. Isn’t that weird?”
Nina smiles.
“I feel like part of me is awake and that part’s really happy. But it has to drag around this other part. This dead weight like an unconscious patient. It’s me. My eyes are closed, I’m in this blue hospital gown.” She crinkles her face.

I think the book would have been greatly improved by cutting the last 200 pages by at least half, leaving out much of adult Madeleine’s romantic relationships and general angst.  I also found certain events at the end somewhat difficult to believe.  This was all rather frustrating, because the first 600 pages are so very faultless.

Nonetheless, the book is unforgettable and I definitely recommend it.  I particularly appreciated learning about a group of people I had never before heard of—the Acadians. I found myself researching the history of the Acadians on the computer the moment I finished the book…it’s always a pleasure when a novel has this effect.