The Murder of the Century 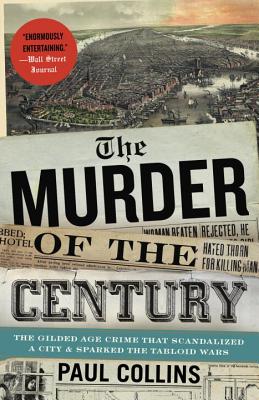 Nostalgia for the past, this book reminds me, is almost always for an imagined past. When I think of how publishing and news “used to be,” I imagine somber, serious, reliable news. I think of reporters and publishers whose interest lay in the “facts” rather than in opinions and sensationalism.  And I think of the average man and woman as far too busy getting the crops in and the laundry done to concern themselves with what may or may not have happened on the other side of town.

How very, very wrong I am. The Murder of the Century—a nonfiction account of a gruesome New York murder in 1897, the search for the killer, and the ensuing trial and newspaper coverage—makes clear that our current obsession with scandal (especially the kind that involves sex and death) and celebrity gossip masquerading as “news” is nearly indistinguishable from that of a hundred years ago.

The papers covering the trial ran (much like our current 24 hour news cycle) morning, afternoon, and evening editions so that the public would have access to the unfolding events almost as they happened.  Courtroom artists were hired for the speed of their sketches, which were then rushed to a waiting coop of carrier pigeons, strapped to the birds legs, who then flew them directly to the newspaper production offices. The drawings of witnesses were often at the printing presses ready to go before the witnesses had even left the stand.

And the public (clearly not the staid New Englanders of my imagination) ate it up. They fought to get a seat in the courtroom, they pushed their way to the front of the line to be the first to get their hands on the latest edition of the paper, they talked exhaustively and endlessly with their neighbors and co-workers about who the possible murderer was, what the murder weapon could have been, how the body had been disposed of. In short, they were every bit as obsessed with this murder as the public of 1994 was with the O.J. Simpson murder.

What with this particular cast of characters (a public ravenous for gossip, journalists lying, manipulating, and stealing to get the scoop, not to mention the murderer responsible for the decapitating and chopping up of the victim) one would think Murder of the Century would be a bit of a depressing read. The fact that it is, in actuality, a delightful, laugh-out-loud, even charming story is, I think, a testament to Collins’ clear love of humanity. He doesn’t judge these people. He doesn’t criticize them. He is not repelled by the most repellent of characters. He seems to be enjoying them all the way one might enjoy the naughty behavior of a small child. And he does this with such a sparkling wit that it becomes impossible for the reader to do anything but smile fondly along with him.

In the acknowledgements page Collins credits his agent and editor for the idea of expanding his book beyond the story of a murder and trial to include the story of the papers (Pulitzer’s New York World and Hearst’s Evening Journal) that covered it. This is without a doubt the best advice the author could have received, as it elevates his book from a merely interesting story about a murder to a hugely entertaining history of the birth of the tabloid wars.

Murder of the Century is one of the best nonfiction books I have read in years.

EXCERPT:
The courtroom tittered, and Thorn smiled quietly while still staring fixedly ahead. The two moved close together until few in the courtroom could see or hear what happened next: a quick squeeze of their hands. It was exactly two weeks since the alleged murder, and the first time they’d seen each other in more than a week. Mrs. Nack leaned in to her lover and whispered.
“Shweige still,” she murmured to him.

Or perhaps she didn’t. A reporter for the New Yorker Staats Zeitung, a paper eminently qualified to eavesdrop on a German defendant, heard this instead: “Halt den Mund und Spricht nicht!” But both messages were the same: Tell them nothing.

“Mrs. Nack and Martin Thorn refuse to talk,” Hearst mused over the proceedings. “All of which is very strange, considering that she is a woman and he is a barber.”

They had already said plenty, of course, as had their witnesses; the mythologizing of the case had begun. Within hours of the indictment, Hearst had a team assembling Journal clippings and reporters’ notes into a 126-page illustrated book titled The Guldensuppe Mystery. The instant book hit the streets just days later, as the first title by the newly launched True Story Publishing Company. Naturally, it heaped priase on the Journal as a “great newspaper” while calling for the miscreants to be electrocuted.

The city followed that prospect so avidly that New Yorkers even attempted trying Thorn themselves. One Lower East Side summer school teacher found that his charges only wanted to discuss Guldensuppe, and he allowed his bookkeeping course to be turned into a mock trial. The result was covered in the Times, which noted that “the bookkeeping lessons quickly dwindled in interest and the full details of the cutting up and hiding of Guldensuppe’s body were gone over by the boys with the greatest relish.” Amid the blackboards and inkwells, “Thorn” and his “attorney”—two eleven-year-old boys—wilted under the aggressive questioning of a roomful of street urchins. Despite an impassioned half-hour-long closing argument by the diminutive attorney, his client was found guilty and sent to the electric chair—which, this being a Manhattan classroom, was simply a chair. School trustees were none too pleased when they learned of this extracurricular jurisprudence. Children were sent back to their bookkeeping texts with a stern admonition from the principal: “I shall permit no more murder trials.”