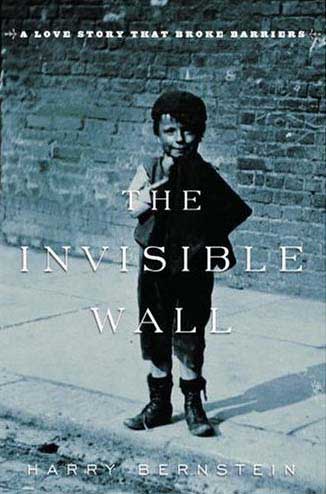 Bernstein was 93 years old when he wrote this memoir (his first book) of his childhood in an English mill town. For those readers who require that their books be firmly grounded in time and place, The Invisible Wall will be a delight. Little Harry describes the segregated working class neighborhood he grew up in—Christians on one side of the narrow cobble-stone street, Jews on the other—with the kind of detailed observation that comes naturally to children, but is generally lost as one grows older. Bernstein is also that most rare of male memoirists: one who actually notices and describes the smallest of interpersonal interactions, a glance, a lifted eyebrow, that bring a scene to life and let us see exactly what the people within the scene are thinking.

There are moments, however, when Bernstein’s writing can be frustratingly similar to typical male memoirs, such as when a young man from the neighborhood kills himself in front of young Harry, and we move from that directly to a new chapter on a new topic with no further mention of how Harry or the neighborhood was affected. He is, in general, much more skillful at describing the feelings and experiences he observes in others than in himself, but he is so good at describing everyone else that I consider this a tolerable limitation.

The Invisible Wall also spares us that most annoying of memoir flaws: a collection of memories, divided by chapter, connected only in the most vague and abstract way, and reading like a series of random musings rather than as a cohesive narrative. Bernstein keeps the reader turning the pages by building his memoir around the events that took place between his sister Lily and the Christian boy from across the street whom she was both in love with and forbidden to speak to, while at the same time telling us the story of a mother desperately trying to feed and clothe her six children, while her violent husband spends everything he makes on drinking and gambling.

EXCERPT:
Lily was obviously embarrassed. “Do you like it?” she said, meaning her dress. “I love it,” my mother said, and there was delight in her voice, and something made her turn toward my father then and ask, “What do you think of your daughter today? Doesn’t she look lovely? Aren’t you proud of her?”

They were questions she would never have asked before. Never would she have dared draw him into the family picture. But her enthusiasm was so great she could not help it. And he in turn—we all look at him to see his reaction, a bit amazed ourselves at our mother’s daring—he wiped his mouth with the back of his hand, and swung around in his chair, and said, without looking at Lily, “Where’s she going? To a ball?”

“No, she’s going to the grammar school for an interview. You know she passed the exam. She came out at the top of the list.” He must have known all this. It would have been impossible for him not to have known with all the excitment her victory had created on the street. Surely it had been talked about in the tailoring shop, too, as everwhere else. Surely he must have heard, and wasn’t it altogether possible that one of the bolder men had ventured to break through his sullen barrier and mention it to him?

Yes, it’s very likely that he knew, and that this could have explained his presence among us this morning. But he was feigning ignorance. “She’s going to the grammar school? Then she’s all through with St. Peter’s?”
“Yes,” my mother said and for the first time a bit of uncertainty came into her voice.
“Then,” my father said, crossing one leg over the other, “Her school days are over. She doesn’t need any grammar school.”

A stunned look came over my mother’s face. Over Lily’s too. Over all our faces. There was a brief silence, then my mother burst out, “What are you saying? Do you realize the honor she’s won, top of the list, the best of all of them, and now a chance to go to the grammar school without any cost, and to become a teacher?”

He cleared his throat. It was a habit of his that usually preceded an outburst, and we all tensed and drew together for comfort. “It’s time she started earning a living, never mind becoming a teacher. I was earning a living when I was five years old. They sent me out to work in a slaughterhouse. I cleaned up the blood and entrails of the animals and the shit and the hair and the eyes that rolled out of the heads.” His voice was rising and beginning to choke with rage. “Five years old, I was. Did I have an education? Did I go to school? She’s been going all her life. She’s twelve years old. Girls younger than her are working already and making money. It’s time she started helping out in this house.”

“But she’s got this chance. It’s her once big chance. She’ll never have it again.”

My mother was pleading, even begging, but it was no use. he got up suddenly from the table, pushing the chair away from himself with that familiar scraping sound, and reaching out a hand to Lily, said, “Come on. Let’s go. I’ll give you a new kind of education.”

This review first appeared in April 2007
By Cindy Blackett