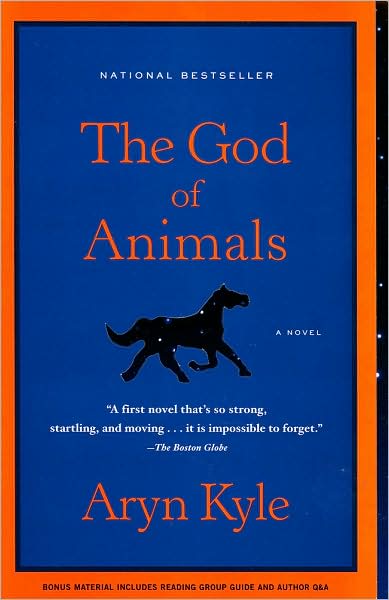 This was another one of those serendipitously happy discoveries in which the book isn’t yours and you don’t mean to give it serious consideration; you only picked it up because you happened to be standing near it at someone else’s house, but soon you realize you’ve reached the end of the first chapter without moving, so you steal the book and carry it with you everywhere for days, until finally you are able to finish it on a long plane ride, and you are grateful to the book for being so engrossing that the plane ride was made both bearable and seemingly shorter, but you are also guilty for taking the book so far from its rightful home.

It’s a book that turns out not to be about what its many early potential plot lines suggest that it will be about. The first sentence is, “Six months before Polly Cain drowned in the canal, my sister, Nona, ran off and married a cowboy.” Polly was eleven years old and had attended the same middle school as the narrator. Her death greatly affects the narrator, Alice, but not in the way you might think: Alice barely knew her and uses the excuse of her death to bring about a situation that is bizarre yet realistic, and emotionally detached yet emotionally out of control at the same time. Reading the book is like actually inhabiting the mind of this confused twelve-year-old who has never left her small rural town somewhere in the middle of the dusty plains just east of the Rockies and who has to work every day after school and every weekend on the family’s run-down horse farm while her mentally ill mother lays in bed upstairs (hasn’t left her bedroom since Alice was an infant). It’s the classic coming-of-age story, in the sense that during the course of the year Alice is thrust into the world of adult matters and loses her “innocence” in many ways, but nothing about this book is predictable.

First, there is the matter of Polly’s death. The book initially seems to be taking us in the direction of murder/pedophiles/ mysteries solved and questions answered, but without giving anything away I’ll just say that this is not at all a book about Polly’s death, and there are just as many questions at the end as there are in the beginning. As for the scandalously disappeared Nona, the sister, we think for the first half of the book that she’s not going to play much of a role, but by the end we realize that this is very much a story about sisters and their complicated relationships. It’s also a book about class issues, particularly as they affect middle schoolers. A wealthy twelve-year-old signs up for riding lessons and Alice’s family becomes dependant on her money, so when the rich mother tries to force a friendship between the girls Alice must play along. They get to know each other, sort of, and they sort of become friends, but wherever you think this is all leading, it’s really not leading there at all. There is no “leading” anywhere, because this author had no intention of tidily wrapping things up. Instead, this book is exactly like real life: you can look back at a period of time in which many dramatic things happened, but you won’t really know which things will prove to be critical and which things will prove to not really matter, and you’ll have just as many questions at the end as you did in the beginning, but the questions will be completely different. I really loved that. It’s good, sometimes, to read a book in which the ending isn’t neatly tied in a bow.

So why isn’t this book 5 stars? It would be, except for the issue of horses. Throughout the book, I kept feeling that something was not quite right with all the descriptions of horses—the daily care of them as well as the specifics of breeding, foaling, breaking, etc. I had no idea what was wrong because I know very little about these things, but I couldn’t shake the feeling that something was wrong. After finishing the book, I read the one-star Amazon reviews because I had a suspicion that my answer would be there. A-ha! Every negative review, without exception, complains about how utterly, horribly, “wildly inaccurate” all her horse information is. I should mention that the one-star reviews are very much in the minority, and even among those, people agree that the book is otherwise excellent. But the author apparently failed to do the necessary and basic research about her setting. Why, oh why?

I also need to alert potential readers that there are upsetting scenes of horse cruelty. One scene, at the end of chapter 14, was particularly dreadful and felt over-the-top gratuitous, although while I was feeling upset by it I was also questioning whether or not it was even possible. Could such a thing happen? I sort of don’t trust that this event is even plausible, given all the other odd things the author writes about the horse world, so ultimately I was able to get past this awful scene by telling myself it was probably unrealistic. (Authors, this is why you need to build our trust by meticulously researching topics you are unfamiliar with. If you want our full buy-in to what is clearly an important scene to you, you must have already convinced us of your knowledge. See point #4 in the Book Shark’s review of The Story of Edgar Sawtelle.)

Nonetheless, I recommend The God of Animals very highly, because it really is an exceptional coming-of-age novel.

EXCERPT:
In the afternoons, the boarders came in twos and threes, carrying coolers filled with frozen grapes and thermoses of champagne and orange juice that they poured into paper cups. Jaycee bought a stereo for the barn and hired an electrician to hook up speakers so that she and her friends could listen to music while they groomed their horses. While Sheila and my father worked in the arena, I would clean stalls and listen to conversations that filtered through the barn. As the hours passed and the thermoses emptied, their voices grew louder and their laughter rose in uncontrollable fits. During those afternoons, I learned that pasta and potatoes made a person fat, that blow-drying hair made it coarse and brittle, that having more than one baby made women’s stomachs droop like deflated tires.

“You’re always working,” Bitsy said while I was mucking out Heathcliff’s stall. “Take a break. Come chat with us.”

My father didn’t like breaks. He said that resting only made it that much harder to start up again. But he also said that I was supposed to be polite and do whatever the boarders asked. So I sat on top of a cooler, nibbling on frozen grapes while they giggled into their paper cups and asked me questions.