The Cry of the Sloth 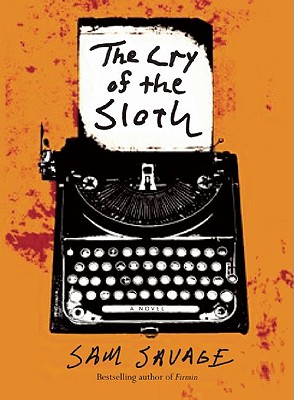 Andrew Whittaker is an irresponsible landlord, a whining ex-husband, editor of a failing literary journal,  and a really really bad aspiring novelist.  In the beginning of this epistolary novel his letters are very funny, as in this one to the loan officer at his bank:
“Yes, I did receive your earlier letter, and I want you to know that we are, as you suggested, taking vigorous steps, that I personally am taking them.  Indeed, things are happening even as I write.  This may not be apparent, since they are happening mostly behind the scenes, so to speak, and in small increments, little bits at a time, which are nevertheless accumulating.”

As the novel goes on however, and Andrew’s pompous self-importance deteriorates into something more like real delusion, the story becomes less amusing and begins to feel, I’m sorry to say, a little tiresome.  This may be because the character’s life—lonely, tragic, doomed—is too similar to that of the rat Firmin (the main character of Savage’s previous novel) though Firmin was heroic, while Andrew is merely pitiful.  Or it may be that there is only so much bad writing (even when it is extremely well-done bad writing) one can take.  It is also possible that the epistolary structure of the novel is simply too suffocating and limits the story in ways that a more traditional form would not have.

Savage is an incredibly talented writer and has one of the most original voices I have come across in years.  I have every intention of reading everything he writes—but I do hope that his next book includes a bit more structure and expands beyond the themes of desperation and despair.

EXCERPT (from Andrew’s novel):
He slumped, sliding down the wall to the floor, where he sat with his back against the yellow wallpaper, legs outstretched and toes pointing up at the ceiling.  Fern wandered over and sat beside him, similarly.  From the street below the window rose the babble and clang of a typical small town, the excited cries of children, both joyous and not, mingled with the chatter of townspeople bumping into each other on  the streets, as they did every day with equal freshness.