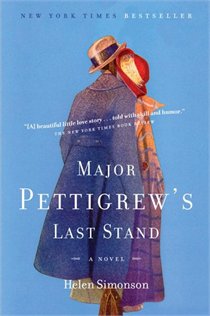 I borrowed this from a friend with the understanding that it is a quiet story about two old widowed people falling in love, which admittedly doesn’t sound terribly interesting. However, my friend spoke enthusiastically of the book’s British sensibility and understated eloquence, so I gave it a chance. To my surprise, within just a few pages I was seized with concern for what would happen to the Major’s family heirlooms: a pair of highly collectible Churchill hunting guns, one of which has been confiscated by the Major’s materialistic sister-in-law. Since I don’t care for hunting guns generally, my concern should be seen as a testament to Simonson’s writing skills.

This is a quiet book, at first, and its tone, combined with very strong, very realistic characters, reminds me of Ann Tyler’s Digging to America. Like Tyler, Simonson focuses on the nuances of family dynamics and what happens when someone from another culture enters the fray. (Digging dealt with American-Iranian cultural misunderstandings; Major Pettigrew is centered on British-Pakistani relationships.)

The sixty-eight-year-old Major was raised in Lahore when it was under British colonial rule; he now lives in an English coastal village that, while relatively sleepy, nonetheless has lots of small-town politics going on, mostly centered around upper-crust fussiness such as proper manners at the local hunting club. His growing interest in the Pakistani shopkeeper, Mrs. Ali, naturally causes some consternation.

The descriptions of these two people spending time together are delightful. Who knew that old people quietly falling in love could make for enjoyable reading?  They stroll through town, there is much drinking of tea, and they discuss their love for Kipling in great detail. I have to say, their conversations about Kipling are written so well that I suddenly felt I needed to go seek out something of his to read—perhaps Puck of Pook’s Hill, which I had never heard of before but which, according to Major Pettigrew, “expresses something important about the foundations of the land.”

The Major bemoans modern society’s loss of tradition and good sense in a very engaging way. His retorts to his annoying family members are clever and sarcastic. And what’s not to love about a book that constantly references “the atrocities of Partition”?  Unfortunately, the end becomes melodramatic—almost absurdly so. There is a suicide attempt at the coastal bluffs, a shooting incident during the suicide rescue effort, and even an attempted murder via knitting needle!

The Major poured them each a second cup of tea and wished there were some way to stop the late afternoon light from traveling any further across the living room. Any moment now and the golden bars would reach the bookcases on the far wall and reflect back at Mrs. Ali the lateness of the hour. He feared she might be prompted to stop reading.

She had a low, clear reading voice and she read with obvious appreciation of the text. He had almost forgotten to enjoy listening. During the dusty years of teaching at St. Mark’s preparatory school, his ears had become numb, rubbed down to nonvibrating nubs by the monotone voices of uncomprehending boys. To them, “Et tu Brute” carried the same emotional weight as a bus conductor’s “Tickets, please.” No matter that many possessed very fine, plumy accents; they strove with equal determination to garble the most precious of texts. Sometimes, he was forced to beg them to desist, and this they saw as victory over his stuffiness. He had chosen to retire the same year that the school allowed movies to be listed in the bibliographies of literary essays.

Mrs. Ali had marked many pages with tiny slips of orange paper and, after some prompting from him, she had agreed to read from the fragments that interested her. He thought that Kipling had never sounded so good.