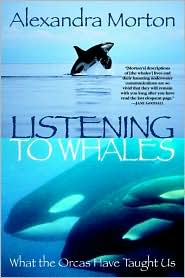 Listening to Whales: What the Orcas Have Taught Us, by Alexandra Morton. Ballantine Books (2002), 314 pages.

Listening to Whales is part memoir and part nonfiction. It’s about whale and dolphin communication, the environment of coastal British Columbia, and orca society, but in addition to the must-know history, science, and environmental issues, this is also an engrossing and very personal memoir by turns inspiring, shocking, and painfully sad.

Getting the nonfiction/memoir blend just right is tricky—many such books suffer terribly from the author’s unwieldy placement of themselves in the story, as they simultaneously try to provide the reader with background information on pertinent issues and insert themselves into the plot, making sure readers know what their thoughts were (and what they packed in the car, and what they ate, etc.) But this book is flawless.  The author must be front and center of this story because no other whale scientist has immersed themselves in their work to such a degree: In 1984, after many years studying the whales at Marineland and Seaworld, Alexandra moved to a very remote island off the coast of British Columbia to devote her life to the study of wild orca communication. She lived on a houseboat and spent all day, every day, for the next fifteen years out on the water studying the orcas while also raising a child on the boat, with no real amenities to speak of.

Alexandra writes both simply and movingly about the incredible obstacles that she endured over the years—the Seaworld employees who harassed her and went after her equipment to prevent her from recording the distress calls of their newly captured orcas, the devastating personal loss she suffered that would have driven most other people back to civilization, and the environmental catastrophe that she valiantly fought against but that ultimately devastated her life’s work.

Most people do not know even the most basic facts of orcas’ lives. I had been unaware, for example, that there are two completely different types: transients and residents. They are exactly the same species, but residents don’t leave the coast and eat only fish; transients roam much farther afield and eat only mammals.

In particular, Chapters 19 and 20 should be read by every person in North America who eats salmon. The information about salmon farming in these chapters, as eyewitnessed by the author, is truly critical for people to be aware of.

This is a book that, if read thoughtfully, will stay with you and change your life.

EXCERPT:
Back in California I saw Orky and Corky with new eyes. Now that I had watched their families roam the wide Canadian straits, the sight of a pair of orcas swimming in a tank only a few body lengths across looked as normal as two people living in a bathroom. I knew where whales belonged, and it wasn’t in captivity.

While their families easily roamed 100 nautical miles a day, these whales had been parked for more than a decade. With their exquisite sensitivity to sound, all Orky and Corky could hear was the constant draining and recycling of their water. With their heritage of extraordinary kinship bonds, the only family Orky and Corky had was each other.

As I lowered my hydrophone into their tank, I felt the uncomfortable weight of understanding descend upon me. The smile on Corky’s face was only the set of her jaw. In fact, there was no smile. I could barely bring myself to look her in the eye. Molecules of her mother’s breath still clung to the frayed wool of my sweater. I had met her own brother, whom Corky would never know.

Orky and Corky probably recognized me as the human who had spent nights with them, but did they know where I’d been and what I’d seen? Thirty tapes of Corky’s natal pod sat in my apartment, but I would never play them for her….

Decades later a film crew at SeaWorld did play a recording of Corky’s family back to her. While her Icelandic pen mates ignored the sounds, Corky’s whole body began shuddering terribly. If she wasn’t “crying,” she was doing something painfully similar.

This review first appeared in September 2005
By Donna Long