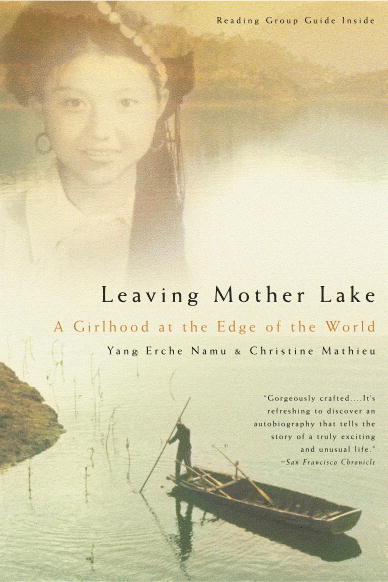 Leaving Mother Lake: A Girlhood at the Edge of the World, by Yang Erche Namu and Christine Mathieu. Back Bay Books (2004), 308 pages.

Anybody who has fantasized about what life would be like in a completely matriarchal society needs to read this memoir. The author was raised in a truly matrilineal culture—the women stay in place and pass on family names and property to their daughters; the young men are the ones who leave the family and have no further claim to the region. And marriage is considered irrelevant: the women here sleep with whomever they wish, whenever they wish, and nobody considers that noteworthy or undesirable in any way. This is an anthropological marvel—but to find it one needs to travel to remote south-central Himalayan China, to a lake straddling Sichuan and Yunnan provinces called Lake Lugu.

Of course a good map is crucial in a book like this—who isn’t dying to know precisely where this alluring land is? Unfortunately, the map is so outdated it reads “Soviet Union” where Russia should be. This book was published in 2004, many years after the Soviet Union ceased to exist. Were the editors asleep? Trying to save money? This may seem like a minor thing to some readers but not to me—I was annoyed by the lack of care evidenced by this map, all the more so because it’s the first thing we arrive at after opening the book.

I have no other complaints though. Namu’s childhood remembrances are entertaining and vivid (I really felt I was there in the freezing cold trying to warm up by holding my legs under yaks while they pee!) and she does an excellent job of providing historical background for her region as well as explaining the way in which greater China’s history impacted Lake Lugu and her family.

EXCERPT:
I was in the vegetable garden cutting up cilantro when Ama called out to me: “Namu! Come over here. There’re some people to see you.”
“Who is it?” I asked incredulously because I was still a child and I had a visitor.
“It’s a Yi man and his daughter,” Ama answered. And she pulled the garden gate closed behind me and hurried me along. He looked much better than the first time I had seen him, with his lips bleeding and his eyes dying, but I recognized him immediately. So he had come back, I thought in amazement. And this time he had come with his daughter, and two horses loaded with big bags of potatoes, wild mushrooms, and wheat flour. In another sack he had three wild hens. And now he was speaking with my mother in Yi, and I could not understand anything, but I heard my mother say my name a few times, and she was smiling and looking very happy Not even in the horsemen’s stories had I heard of such a thing as the Yi man requested, when he explained with grave dignity that he wanted me to become his daughter’s blood sister.

This review first appeared in December 2006
By Donna Long