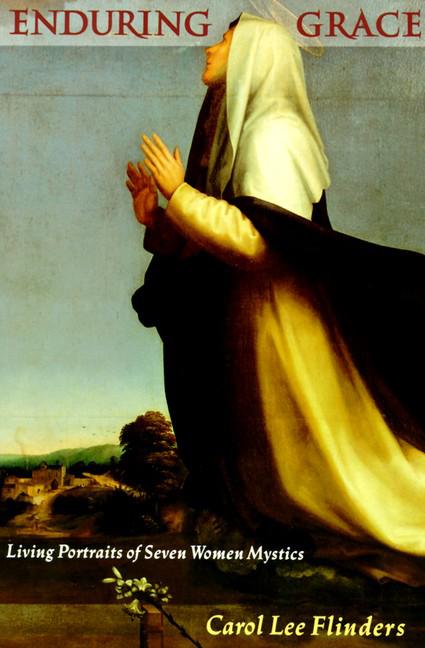 The contemplative, mystical branch of Catholicism has always held great appeal for me in that its followers are attempting to actually experience union with the Divine, rather than merely go to church and listen to someone else talk about Christianity. In this way, the Catholic mystics seem to have much more in common with Buddhists and Hindus than they do with a Christianity that is focused on doctrines to follow and beliefs to uphold.

The women portrayed in Enduring Grace are all European Catholic mystics, ranging from Clare of Assisi (1195-1253) to Saint Therese of Lisieux (1873-1897), who were determined to devote their lives to finding God in their own way, on their own terms, during times when this was simply not allowed by the church. It was certainly not uncommon for young women in the middle ages to flee to a convent to escape an unwanted betrothal, but to have their own ecstatic experiences; raptures, visions, etc., unmediated by a male church authority, was not only not approved of but could put one in danger of being arrested by the Inquisition.

Flinders has done a remarkable job not only of making these women absolutely real to the modern reader—they come across as utterly relatable, living, breathing, mystic-next-door types, despite the extraordinary nature of their experiences—but she has also rendered the places and times in which these women lived with a painter’s eye for detail and a writer’s ear for great prose.

Enduring Grace is a scholarly work (Flinders is a professor of religion and women’s studies at University of California-Berkeley) that speaks to a broad range of topics. It is sure to be loved by those interested in Christian mystics, the European Middle Ages, Catholic saints, women’s history, medieval convent life, and contemplative prayer.

EXCERPT:
On Saint Catherine of Genoa
It is late summer, 1493, and Catherine is forty-six. Giuliano Adorno is dying. The plague has struck Genoa, the most virulent attack ever. The wealthy have fled to villas and estates in the country, where they will wait it out. Before the sumer is over, four-fifths of the people who have stayed in town, mostly the very poor, will die. Catherine, of course, has stayed on. She is in her third year as director of the Pammetone Hospital. Victims of the plague have poured into the hospital, filling to overflowing its beds and even the field behind the hospital. Catherine has requisitioned sails from the shipyards and has had a vast series of tents constructed there behind the great Pammetone. She has organized teams of doctors, nurses, and Franciscan tertiaries, and all summer long, the historians of Genoa tell us, she has overseen them as they ministered to the sick and dying It is for this summer in particular that the city holds her in abiding love and reverence.

On Saint Catherine of Siena
When Catherine showed no interest in men, Monna Lapa turned her over to her married sister, Bonaventura, to whom Catherine was deeply attached. Catherine went through the motions of coquetry and began to slacken ever so slightly in her prayers. Suddenly, though, and shockingly, her sister died in childbirth.

In the family’s bereavement over the loss of Bonaventura—and of the resulting loss to the clan of her husband and the alliance to his family that the marriage had ensured—they decided to procure a husband for Catherine regardless of her wishes. Under the advice of a sympathetic confessor, she chopped off her long golden brown hair. Enraged, her parents dismissed the maidservant and put Catherine to work in her place.

On Saint Teresa of Avila
Teresa’s seventeen foundations were scattered across the length of Spain, separated by rugged mountain ranges with only the vaguest semblance of roads. Year after year, in deteriorating health, she set out to make one after another of these foundations, traveling in covered donkey carts with wooden wheels, laying over at filthy inns, and forced to rely on ignorant or treacherous guides….

Harsh as her travels were, things often got even worse when she reached her destination. Few towns were eager to receive a new community of nuns, no matter what God was supposed to have told Teresa, particularly when the nuns came in without endowment. It took the full force of Teresa’s personality to set those convents in place and keep them there. Problems arose within the convents, too. The time frame God gave Teresa did not always allow for adequate formation of the nuns who would live there or even of their prioresses. She was continually having to resolve disputes and quiet scandals, in person or by mail.