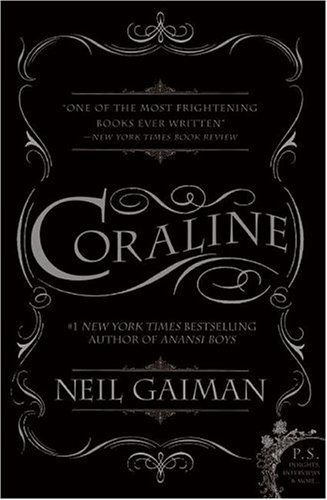 Gaiman, in his young adult novel Coraline, has created one of the most frightening plots in all of children’s literature.  There are many scary things that happen in this story, but what makes it truly nightmarish is the idea that one could have an “other” mother and father who, though seeming at first to be much nicer than your regular parents, are actually terrifying and intend to trap you into living with them forever in your “other” house.

Although Gaiman has been enormously successful with both adult novels and graphic novels, I think his true calling is the children’s/young adult category.  He has a voice that is custom-made for  fairy tales and it is not an overstatement to say Coraline (as well as the amazing Stardust) puts him in the company of Hans Christian Anderson and The Brothers Grimm.  Like his famous counterparts, Gaiman does not compromise in the telling of a story by making the plot a bland and inoffensive thing that will be “safe” for children (he scared me so badly that at one point I actually had to put the book down and leave the room).

This book is an instant classic and is sure to be loved equally by adults and young readers.

EXCERPT:
“If you want to stay,” said her other father, “there’s only one little thing we’ll have to do, so you can stay here for ever and always.”
They went into the kitchen.  On a china plate on the kitchen table was a spool of black cotton, and a long silver needle, and, beside them, two large black buttons.
“I don’t think so,” said Coraline.
“Oh, but we want you to,” said her other mother. “We want you to stay.  And it’s just a little thing.”
“It won’t hurt,” said her other father.
Coraline knew that when grown-ups told you something wouldn’t hurt it almost always did.  She shook her head.
Her other mother smiled brightly and the hair on her head drifted like plants under the sea. “We only want what’s best for you,” she said.
She put her hand on Coraline’s shoulder.  Coraline backed away.
“I’m going now,” said Coraline.  She put her hands in her pockets.  Her fingers closed around the stone with the hole in it.
Her other mother’s hand scuttled off Coraline’s shoulder like a frightened spider.