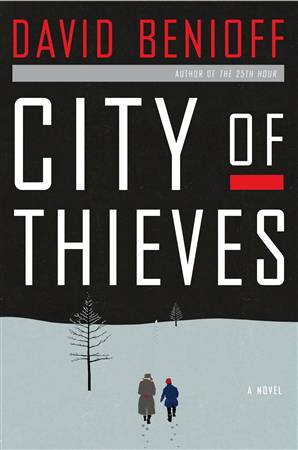 In September of 1941, just two and a half months after Nazi Germany attacked the Soviet Union, the city of Leningrad was completely encircled and a siege that was to last two and a half years had begun. The city’s three million residents were left with no heat, water supply, or electricity, and with so little food that in January and February of 1942 alone, over 200,000 people died of starvation. This is the unlikely setting for one of the funniest books I have read in a long time.

The plot goes like this: a Soviet army “deserter” and a 17 year old “looter” (both quite innocent) are sent to prison and assume they will be executed in the morning. Instead they are summoned to a meeting with the colonel of the Soviet forces defending the city. The colonel informs them that his daughter is going to be married the following week which puts him in need of the ingredients for a proper Russian wedding cake. The colonel’s wife has been hoarding flour and sugar for months, but alas, she has no eggs.

And this is how the two men find themselves sent on the impossible mission (not unlike such fairy tale tasks as spinning roomfuls of straw into gold) of finding a dozen eggs in the besieged and starving city, and returning them to the colonel within a week. In exchange for the eggs, the colonel will not have them shot:

“You understand this is a gift? You bring me a dozen eggs by Thursday, I give you your lives back. You understand the rareness of this gift?”
“What day is today?”
“Today is Saturday. You deserted your unit on a Friday. When the sun rises tomorrow it is Sunday. Can you keep track from this point forward? Yes? Good.”

From this point on, the deserter and the looter travel together through Leningrad, the surrounding countryside, and eventually across enemy lines, in search of eggs.

It is the dialogue between the two of them as they trudge through the snow day after day, constantly bickering about everything—whether to take this road or that road, whether Shostakovich is a patriot or a plagiarizing hack, whether Natasha from War and Peace was a tragic heroine or a whore—that makes City of Thieves so entertaining. At the same time, the story has some of the most heart-breaking, unbelievably horrific scenes I have ever read. I repeatedly found myself laughing aloud and then several pages later having to put the book down and actually walk out of the room to get away from the overwhelming pain.

I must also issue a warning here—there is one incident involving dogs that is really almost too much to bear. If I had known what was coming, I probably would have skipped those pages. For those of you who would like to avoid having the most tragic dog images ever written stuck in your head (as I unfortunately have) there is plenty of time in that chapter to become aware that you are headed toward something you don’t want to know. Simply stop reading at that point and move on to the next chapter.

As much as I loved this book, there are a couple of problems that must be mentioned. The first is in the way Benioff introduces the story. He tells us he was a screenwriter in search of something new to write about and decided to interview his grandfather about life in Leningrad during the war. He recorded his grandfather’s memories every day for a week and City of Thieves is that story. This is ridiculous, contrived, and does not serve the story in any way. Secondly, the last chapter is soap-opera predictable, and is a completely unnecessary add-on. Since the introductory chapter and the last chapter combined, take up only nine pages of the book though, I suggest you completely ignore them and enjoy what is otherwise a really great book.

Finally, a note to the editor. The title and cover art you chose are completely wrong. They have the look and sound of yet another tedious mystery/thriller/detective story, thus simultaneously repelling literary fiction readers (your market for this book) and luring the mystery/thriller/detective readers into a purchase they are sure to be disappointed by. I suggest you remedy this situation in the paperback version by changing the title to A Dozen Eggs and the cover art to an image of a hen nesting in a bed of straw, in the snow, in the square in front of St. Isaac’s Cathedral.

EXCERPT:
I looked at Kolya as we trudged through the snow. He shook his head but never took his eyes off the farmhouse, and I could see the longing in his expression.
“It’s a bad idea,” he said.
“It’s a better idea than freezing to death on the way to Mga.”
“Who do you think is in there? A country gentleman, sitting by the fire, petting his dog? You think we’re in a fucking Turgenev story? Every house in town was burned down, this one’s still standing. What happened, they got lucky? It’s Germans in there, the officers, probably. We’re going to storm the house with a pistol and a knife?”If we keep walking, we’re dead. If we go to the the house and the Germans are there, we’re dead. But if it’s not Germans—”
“So let’s say they’re Russians,” he said. “That means the Germans let them stay there, which means they’re working with the Germans, which means they’re the enemy.”
“So we can appropriate food from the enemy, can’t we? And a bed?”
“Listen Lev, I know you’re tired. I know you’re cold. But trust me, trust a soldier, this won’t work.”
“I’m not going any farther. I’d rather take a chance on the farmhouse.”
“There might be a place in the next town—”
“How do you know there is a next town? The last one is ashes. How much farther to Mga, another fifteen kilometers? Maybe you can make it. I can’t.”
Kolya sighed, rubbing his face with the back of his leather glove, trying to get some circulation going.
“I concede that we’re not going to make it to Mga. That’s no longer an issue. I’ve known for hours.”
“You didn’t want to tell me about it? How far away are we?”
“Far. The bad news is, I don’t think we’re going the right way.”
“What do you mean?”
Kolya was still looking at the farmhouse and I had to shove him to get his attention. “What do you mean we’re not going the right way?”
“We should have crossed the Neva hours ago. And I don’t think Berezovka is on the Mga line.”
“You don’t think…Why didn’t you say something?”
“I didn’t want you to panic.”
It was too dark to see the expression on his stupid Cossack face.
“You told me Mga is on the Moscow line.”
“It is.”
“You told me all we have to do is follow the Moscow tracks and they’ll take us to Mga.”
“Yes, all true.”
“So where the fuck are we?”
“Berezkova.”
I took a deep breath. I longed for powerful fists so I could pulp his skull.
“What’s the good news?”
“Pardon?”
“You said the bad news is we’re going the wrong way.”
“There isn’t any good news. Just because there’s bad news doesn’t mean there’s any good news too.”