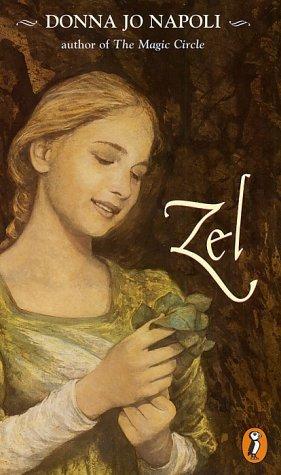 (This review first appeared in May 2003)

This young adult retelling of the classic fairy tale Rapunzel follows the familiar storyline—a witch, a tower, a rope of hair, impassioned jealousy, a lover—but the tale is expanded and given great depth. It is set in Switzerland in the mid-1500s and reads like first-rate historical fiction, as though it’s an account from our shared history that really did happen, and this version has only been slightly fictionalized.

Alternating chapters are told from three points of view: Zel, her “mother” (and captor), and the love interest. Interestingly, only Mother’s chapters are told in the first person, allowing us insight into her personal history and peculiar motives.

Since there is surely no reason to provide some sort of synopsis, I have instead selected several excerpts that give the flavor of the writing, which is both evocative of centuries-old pastoral life and occasionally surreal.

EXCERPTS:
I ease around a barrel of eels and find myself looking at the translucent eyes of newly dead fish. The fishmonger extols their virtues: The whitefish bring intelligence; the bream ensure healthy livers; the chub give vibrant skin. Our Aare River and Thuner Sea yield in abundance, and I am appropriately respectful. The sound of wood slapping wood jerks me away. An old man has just been locked in the stocks behind me. A small crowd gathers. I listen. The man is called Wilhelm. His crime? Playing cards. The church police are foolish indeed, that they don’t understand how evil comes in more subtle guises than card games.

Zel brought all that I ever hoped for from love. I never intended to name her Rapunzel. I thought of Heidrun, Lore, Annelie. I thought of Brynhild, Gretel, Aurelia—even, in all their irony, Christa and Constance. Yet something within forced the name; something forced me to remember the source of the child. That same thing that forces me to come to town at intervals of no more than six months to touch an iron stone near the well in the marketplace and know its solid coldness.

Once Zel had a colony of lice. Her impeccable searching led to their discovery in the paper covering her boiled eggs. Mother must have set the freshly gathered eggs near the paper before she cooked them, for these lice were of the kind that live on hens. Zel kept the lice rolled up in plum skin. She fed them daily, a drop of blood from her tongue, which she would bite. She invited them onto her head. If they would only have taken up residence in her hair, she could have persuaded Mother to shave her head. But they preferred her tongue blood. She tried denying them blood altogether. They waited patiently. One day she dropped them into her crimson ink. Zel, who had once considered all life to be admired, wiped out the lice colony.