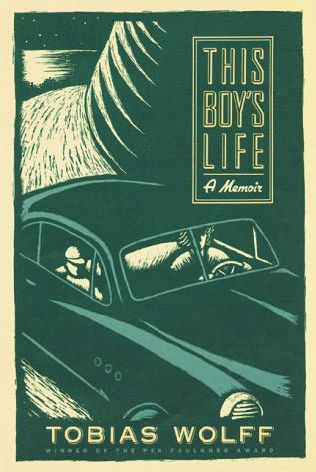 In This Boy’s Life, Wolff writes about growing up in the 1950s, moving from state to state with his mother as she tries to escape a violent boyfriend.  His mother eventually marries and Wolff becomes a stepson to Dwight (Dwight might be able to beat Augusten Burroughs’s lunatic psychiatrist for the Craziest Abusive Parental Figure Award), who torments Wolff throughout the book.

This is that rare kind of memoir page-turner, however, that compels not because you have to see what the insane parents are going to do next, but because of the writer’s voice itself. This is a boy you just want to listen to. He is so genuine and honest that even while throwing rocks through windows, forging checks, and lying to himself and everyone around him, I found him unbearably sweet and vulnerable.

Wolff’s other two memoirs (In Pharaoh’s Army:  Memories of the Lost War, and Old School) are just as good as This Boy’s Life.  If you have read one of them and liked it, you are sure to like them all.

EXCERPTS:
Wolff on his pen pal:
Her name was Alice. My class had been exchanging letters with her class since school began. We were supposed to write once a month but I wrote at least once a week, ten, twelve, fifteen pages at a time. I represented myself to her as the owner of a palomino horse named Smiley who shared my encounters with mountain lions, rattlesnakes, and packs of coyotes on my father’s ranch, the Lazy B. When I wasn’t busy on the ranch I raised German shepherds and played for several athletic teams. Although Alice was a terse and irregular correspondent, I believed that she must be in awe of me, and imagined someday presenting myself at her door to claim her adoration.

On running away:
By the time I started my first year at Concrete High School, I had over eighty dollars squirreled away in the ammunition box. Some of it had been given to me by customers on my paper route, as tips for good service; the rest I’d stolen from other customers. Eigty dollars seemed a lot of money, more than enough for my purpose, which was to run away to Alaska.

I planned to travel alone under an assumed name. Later on, when I had my feet on the ground, I would send for my mother. It was not hard to imagine our reunion in my cabin: her grateful tears and cries of admiration at the pelt-covered walls, the racks of guns, the tame wolves dozing before the fire.

Applying for boarding school:
I had fifty sheets of school stationary, several blank transcript forms, and a stack of official envelopes. I slipped them into the folder again and went back to the cafeteria.

Over the next couple of nights I filled out the transcript and the application forms. Now the application forms came easy; I could afford to be terse and modest in my self-descriptions; knowing how detailed my recommenders were going to be. When these were done I began writing the letters of support. I wrote out rough copies in longhand, then typed up the final versions on offical stationary, using different machines in the typing lab at school. I wrote the first drafts deliberately, with much crossing out and penciling in, but with none of the hesitance I’d felt before. Now the words came as easily as if someone were breathing them into my ear. I felt full of things that had to be said, full of stifled truth. That was what I thought I was writing— the truth. It was truth known only to me, but I believed in it more than I believed in the facts arayed against it. I believed that in some sense not factually verifiable I was a straight-A student. In the same way I believed that I was an Eagle Scout, and a powerful swimmer, and a boy of integrity…

I declined to say I was a football star, but I did invent a swimming team for Concrete High. The coach wrote a fine letter for me, and so did my teachers and the principal.They didn’t gush. They wrote plainly about a gifted, upright boy who had already in his own quiet way exhausted the resources of his school and community. They had done what they could for him. Now they hoped that others would carry on the good work.

This review first appeared in February 2006
By Cindy Pinto