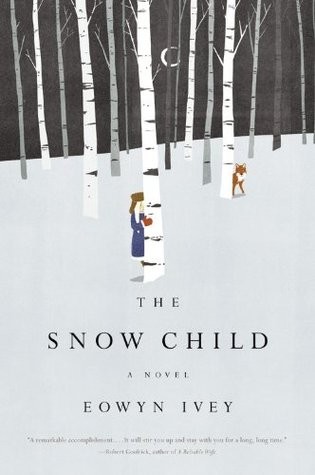 Easily the best book I’ve read in the last fourteen months. It has everything: Russian fairy tales, pioneer homesteaders, a lost child, a red fox, Alaskan wilderness, an orphan, and lots of snow and ice. The snow and ice here is written in such a descriptive way I feel as though I’ve never before read a book with so much cold in it. Now, this is certainly not true, since I’ve read plenty of Jack London, including “To Build a Fire,” but the fact that Snow Child had a colder effect on me than London’s works is strong evidence that Ivey may be the most descriptive and best writer of icy, frozen, arctic environs ever.

This book is perfection.

The story is loosely based on the legend of Russia’s Snow Maiden, specifically Arthur Ransome’s version “Little Daughter of the Snow,” which appeared in Ransome’s 1916 collection of Russian folktales, Old Peter’s Russian Tales.

(Sidenote: About seven years ago, a version of “Little Daughter of the Snow” was published in picture-book format. The story is greatly abridged, but the art is delightful and the book is a must-have for young children.)

Ivey has made this story very much her own, however, first by making the setting 1920s Alaska rather than 1800s Russia, and second by not hewing too closely to the events chronicled in the folktales. Instead, she brings in various threads of the traditional stories that complement her unique plotlines, but always leaves the reader in suspense about which of the threads will be followed and which will not. If you are familiar with Ransome’s story, fear not—the end of Snow Child is quite different, but wholly true to the Snow Maiden’s spirit.

The cover art is so appealing I had to simply hold the book for a long while before starting it. It’s whimsical and very true to the story, and at first I thought it was surely the best possible cover for the book. I have to give kudos, however, to the United Kingdom version, which was published simultaneously with ours. Their cover reminds me of an Astrid Lindgren book for young adults. It’s less childlike, less playful, more mysterious, and more feral. While our cover speaks of friendly innocence, their cover implies a certain feral wildness that perfectly captures an important facet of the Snow Child.

Excerpt:
She had imagined that in the Alaska wilderness silence would be peaceful, like snow falling at night, air filled with promise but no sound, but that was not what she found. Instead, when she swept the plank floor, the broom bristles scratched like some sharp-toothed shrew nibbling at her heart. When she washed the dishes, plates and bowls clattered as if they were breaking to pieces. The only sound not of her making was a sudden “caw, cawww” from outside. Mabel wrung dishwater from a rag and looked out the kitchen window in time to see a raven flapping its way from one leafless birch tree to another. No children chasing each other through autumn leaves, calling each other’s names. Not even a solitary child on a swing.

There had been the one. A tiny thing, born still and silent. Ten years past, but even now she found herself returning to the birth to touch Jack’s arm, stop him, reach out. She should have. She should have cupped the baby’s head in the palm of her hand and snipped a few of its tiny hairs to keep in a locket at her throat. She should have looked into its small face and known if it was a boy or a girl, and then stood beside Jack as he buried it in the Pennsylvania winter ground. She should have marked its grave. She should have allowed herself that grief.

It was a child, after all, although it looked more like a fairy changeling. Pinched face, tiny jaw, ears that came to narrow points; that much she had seen and wept over because she knew she could have loved it still.