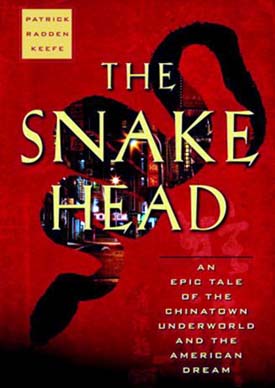 The Snakehead:  An Epic Tale of the Chinatown Underworld and the American Dream, by Patrick Radden Keefe.  Doubleday (2009), 414 pages.

In June of 1993, in the middle of the night, a ship ran aground a few hundred yards off the Rockaway Peninsula in New York.  Two Park Police officers doing a routine patrol saw the ship and, moments later, heard the screams of the passengers who were throwing themselves overboard.

“The officers charged into the water.  It was cold—53 degrees—and the surf was violent, big swells breaking all around them and threatening to engulf the people in the distance…. Then the officers turned around and dragged the shipwrecked strangers back to shore.  There the four collapsed, panting, on the sand. They were Asian men, the officers saw, diminutive and cadaverously thin.  When Somma spoke to them, they didn’t appear to understand.  They just looked up, with terror in their eyes, and pointed in the direction of the ship.”

So begins The Snakehead, a story (and it is indeed an epic one) that starts with a ship carrying a cargo of 290 Chinese immigrants and ends with the trial of Sister Ping—one of the the biggest, most successful human smugglers in New York’s Chinatown—who helped bring the ship to the shores of the United States. Between these two events that bookend The Snakehead, Keefe juggles a multitude of other characters and storylines that spans the globe.

Unlike human trafficking, smuggling is done at the request of the person wanting to relocate.  A Chinese would-be immigrant would make a down payment on the $30,000 fee (this was the cost in the ’90s. Currently it is more like $80,000) to the smuggler (aka “the snakehead) who would then transport this person through various countries into the United States.  At this point the immigrant would collect the remainder of the fee from relatives in New York, pay the snakehead, and then work for the next several years to pay off the relatives.

As the snakehead business became more and more lucrative, gangs got involved, which led to immigration authorities cracking down on smuggling, and then to immigrants finding themselves trapped for months at a time in “safe houses” waiting for transportation into the United States. The underground operations used to smuggle Chinese into the United States becomes so convoluted in The Snakehead that at times it really was impossible for me to follow.  This is not necessarily the fault of the author—I’m not sure anyone could really describe all of this manuevering solely through text.  Which is why the absence of maps that would have made things so much more clear was a serious miscalculation.

I am baffled by the decision to include a tiny diagram depicting a 12-block area of Chinatown in New York, but not a single map of any of the other places that are central to the story.  I had to keep putting the book down to google maps —China, Fujian Province (where the vast majority of the immigrants came from), the straight between Fujian Province and Taiwan, a larger map of New York, including the area where the Golden Venture ran aground, and the location of the York County Prison in Pennsylvania (where many of the immigrants were held).  And even with all of this online assistance, I was still on my own when it came to trying to visualize the hundreds of smuggling routes and  locations of safe houses.

I also feel compelled to say a few words about the cover art.  First of all, the image of a snake is completely unnecessary since we already have the word “snake” in the title.  There is really no need to beat the reader over the head with a second snake reference.  Secondly the photograph of what I guess is supposed to be New York inside of the snake is worse than useless—it is completely misleading.  It, along with the bright red cover, suggests: thriller, action, mystery, police procedural—certainly not the serious, scholarly, nonfiction work that it actually is. In addition, the cover is derivative, uninspired, and boring.  Which is possibly even worse than being misleading.  I hate this cover.  I suggest tearing it off, using color crayons to create your own cover on a piece of cardboard, and taping that onto the book.  It can’t be any worse than what the publishers have done.

So.  Having conveyed my map and cover complaints at length, I do want to make it clear that The Snakehead is a fascinating book and absolutely worth reading.  I can’t imagine any lover of general nonfiction being disappointed (once the cover has been properly disposed of).

Note: The Chinese from the Golden Venture who were imprisoned in Pennsylvania for several years while awaiting immigration hearings started to be visited by members of a local church.  The church members brought magazines for the prisoners who began folding the pages and other scraps of paper into designs. The objects the prisoners created were so remarkable that people in the community asked to buy them, and as word spread, they began to be auctioned off for thousands of dollars. I found a collection of these figures online (unfortunately the link has since vanished) and was so charmed and amazed by them, I felt compelled to include one here.  This is called “horsedragon.” 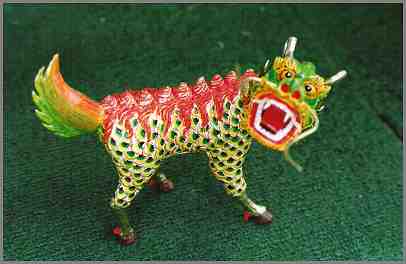 EXCERPT:
One senior immigration official said in the early nineties that “at any given time, thirty thousand Chinese are stashed away in safe houses around the world, waiting for entry to the United States.  Sources within China’s own Public Security Bureau put that number at half a million… .”

Immigration officials marveled at the tenacity and adaptability of the Fujianese; Mexican border-crossers, the traditional targets of the INS and the Border Patrol, looked hopelessly amateur by comparison.  The Fujianese flew into JFK, into Toronto, into Vancouver, San Diego, San Francisco.  When they couldn’t fly directly to North America, they obtained visas, and often passports, from corrupt Central American way stations where the snakeheads had developed a stronghold—Belize, Guatemala, Panama—and flew there, then crossed the border in Texas, Arizona, or California.  One Hong Kong triad, the Sun Yee On, was said to have arranged an operation in which its members chartered jets and sent whole planeloads of illegal Chinese to Belize, from which they could continue overland through Mexico…. INS agents often heard stories about Chinese migrants crossing the border from Mexico, but their apprehension rate of Chinese was always very low compared to that of the Mexicans they stopped every day.  One reason for this, it emerged, was that snakeheads at the border were paying poor Mexicans to run across en masse as a diversionary tactic to tie up the migras while the Fujianese migrants strolled across unnoticed.